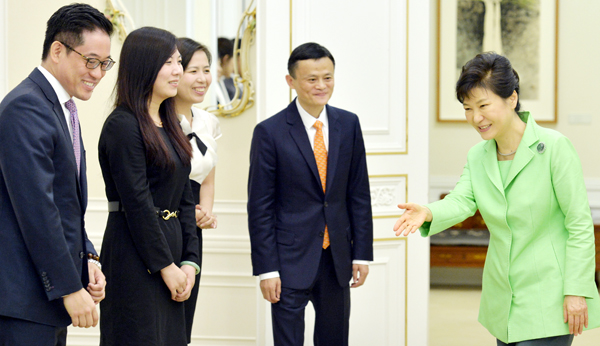 Their meeting comes a month and a half after Ma last visited Seoul in early July as a business delegate with Chinese President Xi Jinping, who held a summit here with President Park.

On the sidelines of the summit, big names from both Korea and China participated in a business forum at the Shilla Hotel in central Seoul, which included Ma as well as his fellow Chinese business moguls, Baidu CEO Robin Li and Huawei CEO Ren Zhengfei.

“I found the last business forum quite meaningful,” Park told Ma. “Business cooperation between Korea and China has so far centered on manufacturing, but the forum provided an opportunity to expand the fields of cooperation as far as service and culture, and to aim to make inroads into each other’s local markets based on it.”

The 51-year-old entrepreneur, who is known to be fluent in English, added, “I visited Korea this time to materialize the business deals agreed upon between the leaders of Korea and China [during Xi’s visit here]. Particular emphasis will be placed on overall measures to revitalize the local market.”

Ma also told Park he was visiting Seoul for a third time in four months.

The president told her Chinese counterpart that if Korea and China eased regulations in digital content, ranging from broadcast to film and games, and boosted investment and trade, it would contribute to broadening the cultural understanding between the two nations.

Set for a New York listing this fall, Alibaba accounts for nearly 80 percent of China’s online retail sales, with more than 100 million visitors a day.