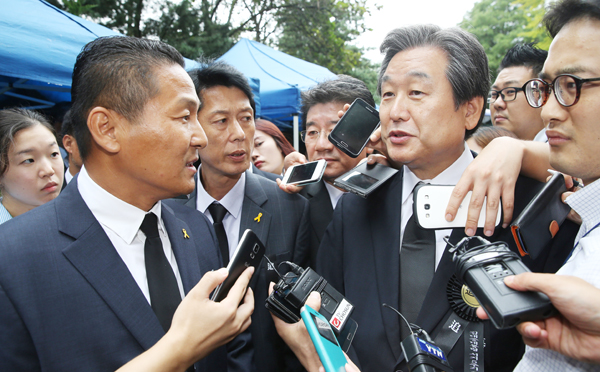 Kim Byung-kwon, head of the association for Sewol victims’ relatives, demands Saenuri Chairman Kim Moo-sung have a talk with the bereaved families yesterday at Seoul National Cemetery. Kim accepted the request and had a meeting at the National Assembly later yesterday. [Joint Press Corps]

The ruling Saenuri and opposition New Politics Alliance for Democracy failed to find common ground yesterday on terms of the special law to investigate the Sewol sinking, but agreed to have leaders from the two parties meet again today, the last day of the August extra parliamentary session.

The failure to reach consensus illustrated how wide their differences were on the legislation, which was meant to get to the bottom of the Sewol’s sinking, which left more than 300 people dead.

It came as a particular disappointment after Pope Francis’ repeated displays of empathy toward bereaved relatives of the Sewol victims during his five-day visit to Korea, which ended yesterday.

After the pontiff’s heartwarming gestures of support for the grieving relatives, who have demanded swift passage of the special law with terms they have insisted on, expectations rose that the parties would finally reach agreement.

But floor leaders from each party only agreed to meet again today in a last ditch effort to find middle ground.

Saenuri Party Chairman Kim Moo-sung met with Kim Byung-kwon, head of an association of Sewol victim’s relatives, and three other family members at the National Assembly. Kim explained the ruling party’s position to the relatives, according to the JoongAng Ilbo.

Kim said yesterday there was no room for the party to yield on the negotiations, saying the Saenuri already backed away enough on its earlier demands on the special law at the insistence of the NPAD.

At the center of contention between the parties is the formation of a recommendation committee to appoint a special prosecutor who will head a special team to get to the bottom of the April 16 sinking.

The opposition is demanding that it be allowed to name three committee members, and the Saenuri only one. The committee will nominate two candidates as special prosecutor and President Park Geun-hye will choose one.

Sewol victims’ families support the NPAD because it believes the recommendation committee should have more figures from the opposition to ensure a thorough and impartial investigation, which could target presidential officials if necessary, independent of pressure from the Blue House.

The NPAD is also adamant that unless agreement is reached on the Sewol law, it will not work to pass other legislation, including a bill to give special college admission treatment for 12th grade students at Danwon High School in Ansan, Gyeonggi, which lost more than 200 students in the Sewol sinking.