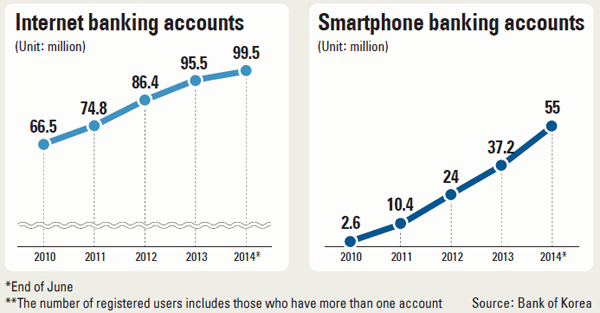 Internet banking is a runaway success in Korea with accounts nearing 100 million, according to the Bank of Korea yesterday.

And more than half of those users are now accessing their accounts via smartphones and tablets.

Many Koreans have two or more accounts that they access online. As of the end of June, there were 99.5 million registered Internet users, including both individual and corporate accounts, a 1.8 percent increase from the first three months of this year.

The quarterly growth pace of 1.7 percent at the end of June, however, decelerated compared to the 2.4 percent in the first quarter. That was largely because individual user registrations slowed.

As of the end of June, there were 93.4 million individual Internet banking accounts.

Corporate accounts expanded faster. There were six million corporate users registered at the end of the first half, up 3.2 percent compared to the previous quarter. This is faster than the 2.2 percent growth seen in the first quarter.

As a result, mobile users now account for 55.3 percent of overall Internet users. This means that while some people still rely on desktops to do their banking chores, they are outnumbered by people accessing bank accounts from mobile devices, mainly smartphones.

However, nearly all of the people who use mobile devices to do their banking are checking their bank accounts rather than wiring money or making payments.

The use of mobile devices for transferring money only accounted for 9 percent of the total banking businesses.

“It’s becoming clear that people are using smartphone banking as an alternative to attending to their banking business from desktops whether it’s to look at their bank balances or to make small money transfers,” said a BOK official.