Curved and UHD the buzz for Berlin

Curved and UHD the buzz for Berlin 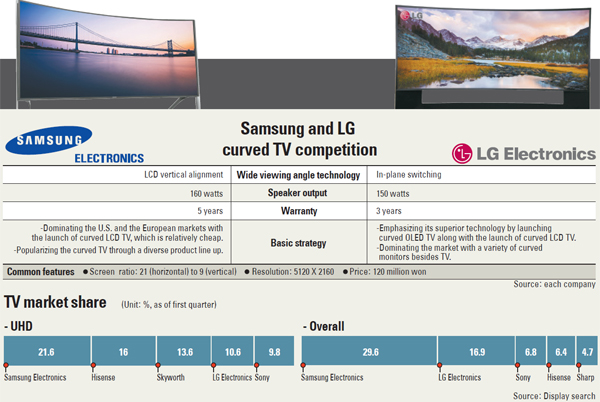 Samsung Electronics and LG Electronics will compete for the global premium TV market in the second half of the year with product launches at IFA Berlin starting Sept. 5.

The emphasis will be on ultra high-definition (UHD) and curved TVs.

Despite the 120 million won ($118,000) price tag of 105-inch curved UHD TVs offered by both Samsung and LG, demand for premium TVs is increasing.

Not only do the TVs have the same price, but they also have the same size - 21:9 ratio screens with resolution that is five times higher than full HD at 11.06 megapixels. And they both use the liquid crystal display (LCD) panels.

The difference is that Samsung uses so-called peak illuminator technology, which allows viewers to distinguish even subtle differences in brightness.

From the second half of this year, LG’s curved UHD TV will be launched in the Middle East, Europe and the United States. In addition to curved TVs, LG will launch curved monitors for computers.

While the two companies have the same goal of dominating and leading the premium TV market, their strategies differ. Samsung will focus on curved TVs, but will use LCD panels with lower resolutions for some TVs to keep prices competitive. The result is a line of curved full HD TVs priced between 2 million won to 3 million won.

OLED panels do not need a separate light source and are more suitable for curved TVs than LCD panels, said LG Electronics.

LG will launch the curved UHD OLED TV in 64-inch and 77-inch sizes in the domestic market on Monday, the first release of an OLED TV with ultra high definition.

“The major competition will be ultra high-definition LCD TVs, but OLED TVs will become popular next year,” said a spokesman for LG Electronics.

It will introduce the globally popular racing game Need for Speed and sports games Real Football and Golf Star for free on its Smart TV game panel. Users can download an application from the Samsung Smart TV game panel at no charge.

These services are available with the 2014 smart TVs and will be provided for free in Europe, Korea and the United States.