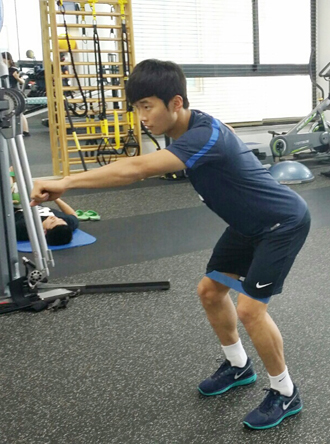 Kim Jin-su of TSG 1899 Hoffenheim works out during a rehabilitation program in June in Namyangju, Gyeonggi. [JoongAng Ilbo]

When he’s not in uniform, TSG 1899 Hoffenheim defender Kim Jin-su, who stands at 177 centimeters (5-foot-8) and weighs 69 kilograms (152 pounds), doesn’t look like someone who plays in the tough German Bundesliga. But in Korea, he is known as a tenacious-fighting bulldog who never gives up on anything.

He joined Japanese club Albirex Niigata in 2012 after graduating from Kyunghee University but was sidelined for three months after having knee surgery just six months later.

Since then, he successfully recovered from the injury, became a starting defender for his team and was selected by Korean national team Coach Hong Myung-bo for the 2014 Brazil World Cup in May. At the time, he expressed his fighting spirit, saying, “I will beat Romelu Lukaku of Belgium whenever I compete for a header.” But his dream wasn’t realized as he was replaced on the roster by Park Joo-ho of FC Mainz 05 due to an injury.

But Kim didn’t waste time being disappointed in himself and made another dream come true - playing in a European league - joining Bundesliga club Hoffenheim in June. With accurate crosses to attackers and decent defending ability, he has secured his spot as the team’s left wing-back by impressing Coach Markus Gisdol.

“Kim’s ability as a side defender is competitive enough to be compared with defenders Park [Joo-ho] and Japanese Uchida Atsuto of FC Schalke 04 who successfully settled in the league,” said football analyst Han Jun-hee.

Ilgan Sports, an affiliate of the Korea JoongAng Daily, had a phone interview with Kim yesterday.

Q. You have a Bundesliga debut match against FC Augsburg on Saturday [Korea time]. How do you feel?

A. I’m very excited about that. I’m physically ready for a new challenge, though I’m still trying to adapt to a new environment.

Learning a new language must be hard for you. Do you find any difficulties in adapting to the new environment?

This is my second overseas life after Japan, but I think they have two very different environments. I kind of realized how hard it has been for other Korean players in Europe. I don’t have many problems understanding German, but speaking is hard. I want to speak fluent German when I give an interview with local media in the future. Fortunately, the club really takes care of me well. They hired an interpreter for me, and my mother has been providing me good food since she came here on Tuesday.

It seems like you are already one of Coach Gisdol’s best 11 players.

When I saw him leading the club in the past month, he is a strong leader who leads the club with great passion. He videotaped my training and sometimes gave me valuable tips to improve my defending abilities, including a way to adapt to the team’s strategies.

Do you think your football style goes well with Hoffenheim?

This team never stops attacking on the field and one of the strategies for that is that side wing-backs like me are asked to engage in the team’s offense aggressively. We play like we will score two if we allow one goal, and I love that.

The Incheon Asian Games are a month away. Are you ready to roll?

I’m excited that Coach Lee Kwang-jong picked me. I will try to bring home a gold medal for the first time in 28 years with my teammates.