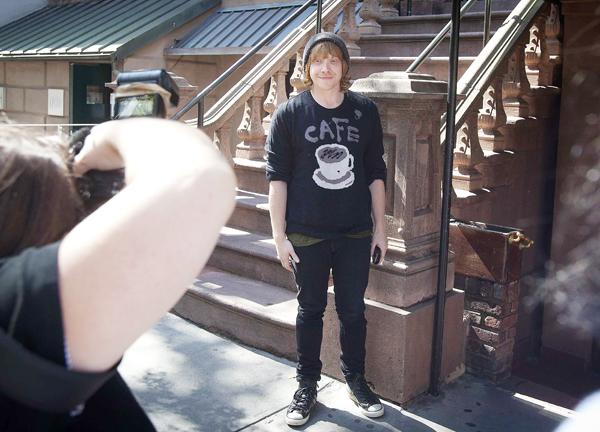 Actor Rupert Grint arrives for a news conference to promote the Broadway play “It’s Only a Play” in the Manhattan borough of New York on Tuesday.[REUTERS/NEWS1]

The play, which begins previews on Aug. 28 and opens for a limited run on Oct. 9, sports a notable cast headed by Tony winners Nathan Lane (“The Producers”), Matthew Broderick (“How to Succeed in Business Without Really Trying”) and Stockard Channing (“A Day in the Life of Joe Egg”).

“It’s hard not to be overwhelmed when we’re rehearsing,” Grint, 25, said about his cast mates. “It’s quite exhausting trying to keep up with them.”

The fly-on-the-wall comedy is set at an opening night party of a new play, “The Golden Egg,” as its director Frank Finger (Grint) and the playwright, cast, producer and friends await reviews to see if it’s a hit.

“He’s a very complicated, deeply troubled man. So it’s something I’ve always wanted to try,” said Grint, who admitted it was scary leaving the bumbling Ron Weasley character he portrayed in the “Harry Potter” films for so long.

“I’ve been through this many times, and it’s endlessly fascinating to be, I hope for the audience, to be a fly on the wall in the midst of the event of waiting for The New York Times review, which is the centerpiece of the play,” added the Broadway veteran, who has been through his fair share of opening nights.

“It’s Only a Play” reunites Lane and Broderick, who worked together on hit musical “The Producers” and other shows. It also brings Abraham full circle with McNally, who cast him in a play decades ago early in his career.

McNally said he has been working on “It’s Only a Play” all of his life and it has had many manifestations. He got the idea for the comedy on the opening night of another play that starred Abraham.