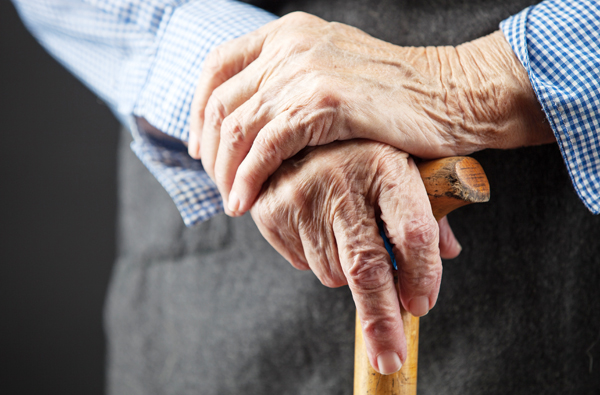 Hong Wha-sik, a 54-year-old housewife in Yangjae-dong, southern Seoul, has been suffering from insomnia lately. She should be relaxed after years of saving and thrifty living. She owns an apartment and her two children are married and working. But she feels increasingly uneasy as her husband, an executive at a midsize manufacturer, approaches retirement.

“I feel so anxious about our financial status as we get older,” Hong said with a sigh. “Even though we have a pension plan, I don’t feel reassured.”

Hong is even agonizing over whether to take her husband’s retirement income as a lump sum to invest in another property, because she hears pension fund investments are not profitable enough.

Like Hong, many Koreans feel insecure about life in retirement due to the level of public pension benefits.

To help ease such concerns, the government plans to announce next month that it will require companies to have all employees subscribe to private pension products and increase investment options for pension funds to boost yields.

The new measures need to be approved by the National Assembly.

“Related ministries are discussing mandatory retirement pension plans that would be introduced at large businesses and phased in for smaller ones,” said an official at the Ministry of Strategy and Finance.

The requirements will apply first to companies with more than 300 employees, according to ministry sources.

“Employees at large conglomerates are mostly signed up for retirement pensions, but most employees at small businesses are not,” the official said.

A key objective is to have employees receive their pensions in monthly payments rather than lump-sum retirement allowances.

This was part of the government’s latest tax reform plan, which would replace the share of retirement allowances subject to taxation from the current 40 percent to a range of 15 percent to 100 percent starting in 2016.

In addition, opting for retirement allowances to be paid monthly would reduce the tax liability by 30 percent due. The reform plan also would expand the tax deduction ceiling on retirement pension products from 4 million won ($3,914) to 7 million won.

A recent report by the Korea Development Institute said private consumption is in the doldrums due to consumers’ growing worries about making ends meet in retirement.

A normal average consumption propensity should rise as society gets older, according to the institute, but that is not the case in Korea.

“Despite the rising life expectancy, the work period is not being extended, causing a majority of consumers to spend less and save for later,” the report said. “As people reach their retirement age, they tend to cut back spending more.”

A survey by KB Financial Group’s think tank showed that Koreans’ preparations for retirement are decreasing rather than increasing due to the rising cost of living and falling disposable household incomes.

An index developed by the organization as an indicator of how well people are prepared for retirement posted 50.3 out of 100 last year, down more than 2 points from the previous year. The index for those in their 50s fell 7.1 points during the same period to 32.8.

As of last year, about 4.7 million employees across the nation were subscribed to pension products with government-designated financial institutions, according to data compiled by the Financial Supervisory Service. The total for all pension funds reached 85.3 trillion won.

The government introduced the private pension system in December 2005 to help employees prepare for life after work. Previously, employers held retirement funds internally and they did not accrue interest.

The DB type pays a monthly sum in retirement calculated according to the length of employment and average monthly wage. The amount of the retirement allowance is notified by the company before retirement. The employer contributes a minimum of 60 percent of the allowance, and it decides how to manage the fund. DB plans are widely adopted by large companies with stable employment conditions and low risk of bankruptcy.

The IRP has two sub-types, one for small companies and the other for individual employees. Workplaces with fewer than 10 employees must have all of them agree to the terms and conditions of an IRP. The employers handles management of the fund. 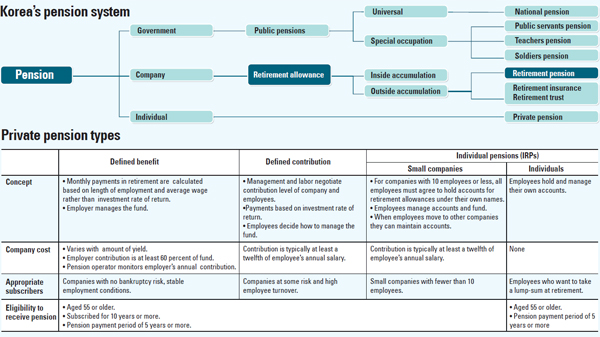 The IRP for individuals is run independently by workers and the retirement allowance can be taken either as a lump sum or monthly payment.

Employers can choose one of the three types through negotiations with employees.

Pension products allow the investment of funds in a variety of instruments such as bonds, stocks and futures. But the government caps the amount that can be put in riskier investments at 40 percent of the fund.

However, over the past nine years, the performance of pension products has not been much different that regular deposit products at commercial banks due to low interest rates.

According to the Financial Supervisory Service, about 93 percent of retirement pension products produced annual yields of 2 percent to 3 percent, which is even lower than the national pension.

As of March only 15 percent of small businesses subscribed to a pension system, said the FSS.

“Because there is lack of public understanding about the pension system, it is not serving as a proper replacement for income in retirement,” said Kang Dong-soo, a KDI research fellow at a recent seminar. “Most people prefer lump sums.”

But riskier investments also could result in lower retirement allowances.

The government aims to ramp up the average yields of pension products to 10 percent. It may increase the allowable share of riskier assets like stocks and funds in DC products to 70 percent.

Currently, employers and employees use bilateral contracts to manage their funds. In the future, the government plans to allow employers and employees to choose a trust institution and leave their retirement funds in trust as a way to increase diversification of investment, which should help more cash flow into the securities market.

Many experts call for a change of perception about the pension system, saying Korea’s has been too conservative.

“The government’s regulations on management of retirement pension products have been too strict,” said Kim Young-do, a research fellow at Korea Institute of Finance. “The 401(k) in the United States and Australia’s Superannuation are credited with developing the countries’ financial markets and contributing to stabilizing the lives of retirees. It is urgent for the government to establish such system.”

On the other hand, some say it is too early to adopt the trust-type pension system because the Korean stock market isn’t mature enough.

“During the 2008 global financial crisis, a number of equity-based funds posted negative yields,” said an official at the Ministry of Employment and Labor. “If the pension system were liberal at that time, many would have ended up with nothing in their retirement accounts.”