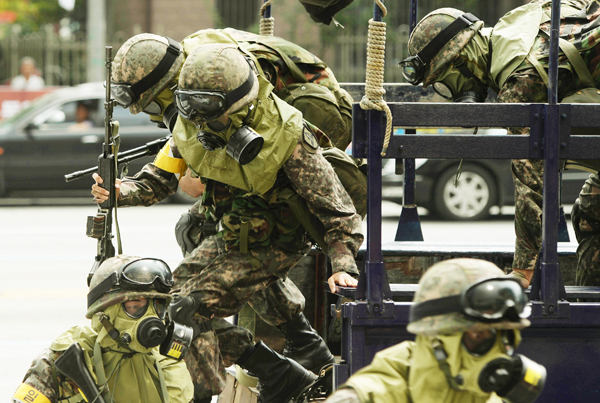 The customized war games, assisted by computer simulations, will see the participation of 30,000 U.S. troops, of which 3,000 come from overseas locations, according to the Joint Chiefs of Staff.

Another 50,000 South Korean troops will join the drills on Aug. 29, near the end of the exercises, which are aimed at testing combat readiness for a North Korean invasion as well as peacetime provocations.

The Korean Army, Navy and Air Force will participate, as well as 10 United Nations Command countries: Australia, Canada, Columbia, Denmark, France, Italy, the Netherlands, New Zealand, Norway and the United Kingdom. The drills will focus on a joint defense posture against the threat of North Korea’s weapons of mass destruction and are connected by communications networks that reach U.S. military headquarters worldwide.

They provide an opportunity to test senior leaders’ decision-making capabilities as well as combined planning between the commanders and staffs of the Korean and U.S. forces.

On Tuesday, President Park Geun-hye presided over the first Ulchi National Security Council meeting on the second day of the joint exercises in the situation room, informally called the “Blue House underground bunker.”

“Through the drills, we need to comprehensively examine if the government will function in wartime conditions and support military operations to guarantee the ability to continue in war,” Park said, adding that this included checking evacuation facilities and preparing procedures for all public agencies to switch over to wartime operations.

“The Ulchi drills are conducted yearly, so it may get stuck in a rut and be viewed simply as an annual event,” she said. “So there needs to be tension and full engagement in the drills .?.?. and hypothetical situations should be applied to reflect that reality.”

During a defense ministers’ meeting in October, Seoul and Washington agreed upon a newly introduced tailored deterrence strategy to counter the North’s nuclear and missile threat.

U.S. military officials also said that the exercises will serve as a test of its military equipment, such as its Mine-Resistant Ambush Protected vehicles, which have been deployed to Korea to see how they can be used here.

Civilians and officials, as well as emergency workers such as firefighters and medics, further participated in nationwide evacuation drills yesterday to prepare for potential terrorist attacks from North Korea or elsewhere, as part of a four-day emergency exercise to coincide with Ulchi.

The exercise, previously called Ulchi Focus Lens, has been conducted by the U.S. Combined Forces Command and the South Korean military since 1976.

Over the past several days, North Korea has protested the joint military maneuvers through its official mouthpiece, the Rodong Sinmun, and other state media, threatening to launch “pre-emptive attacks.”

It labeled the joint military exercises as war rehearsals against Pyongyang and threatened to turn Seoul into a “sea of fire and ash.”

However, the Combined Forces Command called the drills “routine and defense-oriented” to maintain stability on the Korean Peninsula and added that it is “not connected to any current world events.”