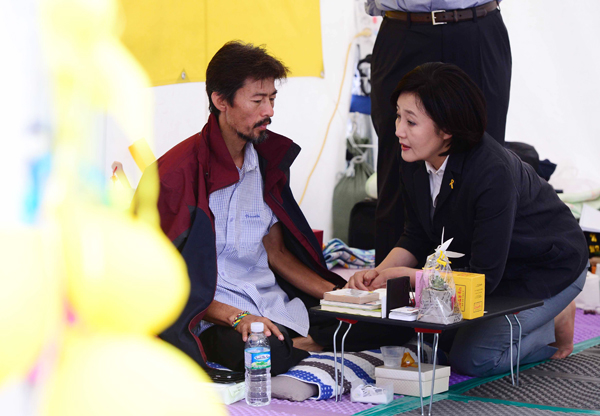 Park Young-sun, floor leader of the New Politics Alliance for Democracy, tries to persuade Kim Young-oh, father of a teenage victim of the Sewol sinking, into accepting the terms of an agreement on the special Sewol law, yesterday at Gwanghwamun Square, where he has been holding a hunger strike. [NEWSIS]

The leader of the New Politics Alliance for Democracy(NPAD) spent a frantic day yesterday trying to persuade fellow party members and relatives of the Sewol victims to accept terms of an agreement on the special Sewol law that she reached with the ruling party Tuesday.

Rep. Park Young-sun, the interim leader of the largest opposition party, was in a tough position after the agreement she accepted with her Saenuri counterpart Lee Wan-koo did not gain endorsement from her own party lawmakers during a meeting Tuesday night.

NPAD lawmakers distanced themselves after news broke that the bereaved relatives said the agreement fell short of what they demanded in the law.

In her first stop yesterday, Rep. Park visited Gwanghwamun Square in central Seoul, where Kim Young-oh, father of a teenage victim of the Sewol sinking, was on the 38th day of a hunger strike yesterday demanding a thorough probe of the tragedy. Park asked him to endorse the agreement.

“I asked him to forgive [the opposition] because we had our own faults [in the negotiations],” said the former TV journalist following her brief meeting with Kim, who was consoled by Pope Francis before a Mass near his protest site Saturday.

On the notion of holding additional talks to change the terms of the agreement, Park said, “I told him we could not do it.”

Under the Tuesday agreement, the Saenuri Party will be allowed to choose two members of a committee to recommend two candidates to be a special prosecutor to investigate the tragedy, but only after its selections are approved by the relatives of the Sewol victims and the NPAD.

The concession on the part of the Saenuri was beyond the agreement it reached with the NPAD Aug. 11, which Park reneged on four days later.

The rival parties were able to find middle ground on how to form a recommendation committee that will select two candidates for a special prosecutor to investigate the cause of the April 16 sinking, which left more than 300 people dead. President Park Geun-hye will make the final choice of the special prosecutor.

But NPAD lawmakers decided to not endorse the terms because of the families’ objections during a general member meeting Tuesday after the announcement of the agreement.

Many NPAD lawmakers spent yesterday hoping for a change of mind among the relatives.

After details of the agreement were reported, the families of the Sewol victims expressed frustration that the opposition again failed to deliver their demands. They wanted the Saenuri Party to be stripped entirely of the right to choose two recommendation committee members.

“The families object to the agreement because the ruling party still has a share of two committee member recommendations,” said an association of the bereaved families in a statement released Tuesday night.

The families mistrust the Saenuri’s commitment to find out the truth behind the Sewol sinking and the government’s botched rescue.

The families believe that the party will stand in the way of choosing an impartial special prosecutor who can resist pressure from the Blue House to cover up its lapses in the rescue operation. The relatives want the opposition to name all four committee members.

“The ruling party says it will get approval for its choice of two committee members,” said Chun Myung-sun, a vice director of the families’ association. “But if we reject its choices, the Saenuri will keep selecting members the families cannot accept. The repeated objections will eventually impede a thorough investigation.”

The association of the relatives was to hold an all-member meeting at 7 p.m. yesterday to decide whether to accept the agreement. The outcome of the meeting was not known as of press time.

As the two parties remained gridlocked over the special law, a myriad of bills aimed to improve people’s livelihoods were in limbo because the NPAD refused to pass any bills before the Sewol law. Not one bill was passed during July’s extra parliamentary session, something unprecedented in Korean parliamentary history.

The opposition party’s inability to come to an agreement that satisfies the victim’s families has spawned criticism of it.

“The political establishment is being dragged down by the grieving families,” said Kim Hyung-jun, a professor of political science at Myongji University. “While it is important to communicate with the people, it is equally important to lead them with strong resolve and principles.”

The ruling party was not spared from criticism either.

“What is at stake for the National Assembly now is whether it could produce an outcome that the people can agree with,” said Lim Chae-jung, a former Assembly speaker. “The agreement by the parties is only meaningful when it reflects the demands of the people at a minimum level. But it seems that the Saenuri is interested in cornering the opposition [with the law].”