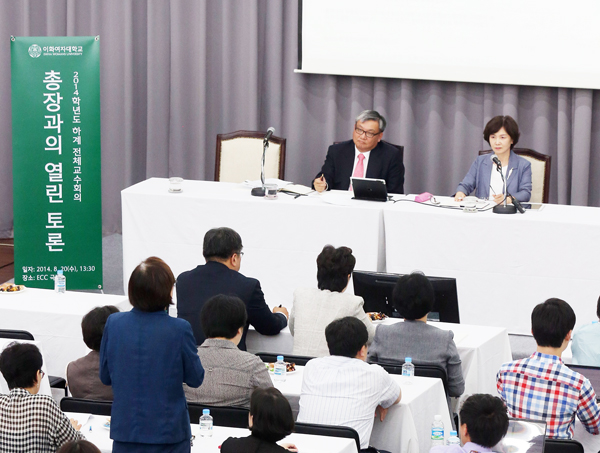 Previously, presidents delivered a speech, attended a lunch and had discussions with each college of the university. Choi said she wanted to have a candid talk with professors.

The public conversation went on for two hours in a theater at the Ewha Campus Complex and about 400 professors filled the venue.

“I came here for forthright comments,” said Choi when she stepped up on the stage. “I feel nervous of the questions you will ask me but am also excited to answer them.”

Professor Jo Sang-mi, who teaches social welfare, made a start by complaining about the university’s complicated administration.

“When I tried to introduce a program about social enterprise, I had to go through a number of offices to get your permission, and when a foreign university suggested a team teaching program, the school refused it saying that the two universities had different semester systems,” Jo said.

“Different semester systems can’t be an excuse,” Choi answered. “I will also try to integrate the school administration system. Or you can e-mail me. I always check because I’m addicted to e-mails.”

The professors who came to the event were also allowed to ask anonymous questions through texts.

“We want maternity leave and the Ewha Womans University should take the leading role in having such considerations for women,” a message read.

“I think most female professors here are giving birth during vacations,” Choi said. “But that is an outdated custom. We are now planning to establish infant care facilities funded by a company.”

In the two-hour session, Choi also promised to give an office to each medical professor, many of whom share offices, and to take into account different characteristics of each college for evaluations of professors.

“The conversation was more useful than expected,” said Professor Lee Geon-jeong of the nursing science department.

Business administration Professor Ahn Ji-yeong added, “I could feel that the president was willing to communicate with us.”