Samsung will show its future home tech at IFA

Samsung will show its future home tech at IFA 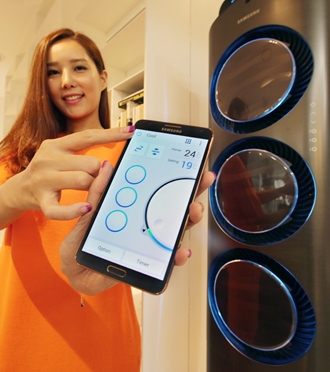 A Samsung Electronics air conditioner that uses the smart home system. Provided by the company

Samsung Electronics is ready for the future home, and it plans to introduce its premium electronics and services that are part of the Samsung Smart Home at the IFA 2014 in Berlin in early September.

Smart Home is at the core of the Internet of Things (IoT), which Samsung believes will be at the forefront of the IT industry after smartphones and tablet PCs.

At this year’s IFA electronics show, Samsung plans to show its vision of a future home, where all electronics are connected to smart devices.

Samsung’s exhibit will show consumers the benefit of its interconnected home electronics service.

In addition, Samsung will expand its range of smart home service devices, including door locks, IP cameras and smart plugs.

The safety service is a security system of IP cameras that watch over the house and can send alerts to registered smartphones of family members when a door lock is opened while they are not at home.

Samsung will also showcase its energy-monitoring service, which aggregates the electricity used by all the devices connected to the smart home service and notifies the residents of the estimated cost.

The location awareness recognizes that a user is near the house via his or her smartphone and automatically turns on the lights, air conditioners and other home electronics to welcome the user before they arrive.

Users can also turn on an air conditioner, a vacuum cleaner or a light from anywhere in or outside the house using the voice recognition service S Voice, which is also used in Galaxy smartphones and wearable devices such as the Samsung Gear series.

Samsung said voice recognition technology can also carry out more specific verbal orders such as lowering the temperature of an air conditioner or turning on the lights in a specific room.

Samsung Electronics will exhibit its Smart Home products at CityCube Berlin, which is about 8,730 square meters (2.1 acres), the largest exhibition hall used by any participating electronics company at this year’s IFA.

CityCube Berlin is a supersized exhibition space that opened in May. Messe Berlin, which organizes international trade fairs, put a lot of work into building the venue.

Samsung will use the entire three-story building for displays, meetings with business partners and internal meetings.

“Visitors to the exhibition will be able to experience a variety of products in the future smart home,” Yoon said, according to a press release. “Through the exhibition at CityCube Berlin ... we will widely promote Samsung as the company leading the electronics industry.”

The global smart home market, which is worth about $48 billion according to the market research firm Strategy Analytics, is expected to grow steadily to $111.5 billion in 2019.

Samsung has been expanding into the market by acquiring IoT companies from around the world to make the smart home and IoT business key parts of its business, as its smartphone sales decline.

“Samsung has a competitive advantage to lead the IoT business, as it not only has smart devices such as smartphones and tablet PCs, but also has competitiveness in semiconductors and home electronics such as TVs, refrigerators and air conditioners,” said an analyst at a local securities firm.