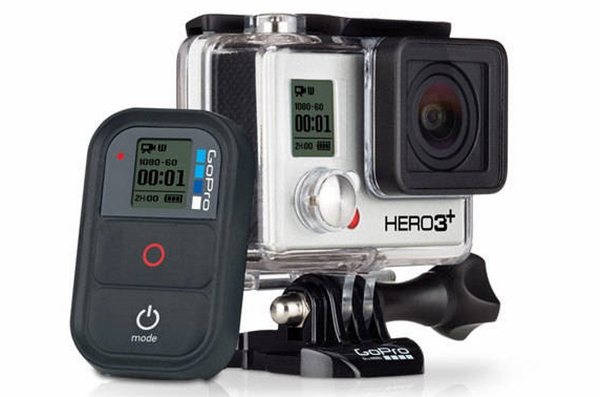 As the popularity of outdoor sports grows, the market for wearable action cameras, which capture activities in high-resolution stills and high-definition videos, is also expanding.

Ordinary consumers have recently turned to action cameras to capture and share better quality videos and photos that are difficult to shoot with a smartphone or digital camera. While action cameras in the past were large and expensive, the trend is now being led by portable and light cameras such as the GoPro, which is affordable and smaller than a user’s palm.

“I do not do extreme sports, but I found out about the GoPro through social networking services [SNS] such as Instagram and YouTube, where many users upload videos and still images shot by GoPros,” said Kim Mi-young, 27.

“I like to travel overseas a lot with my cameras, so I purchased a GoPro, which is different from normal cameras because it captures a much wider field of view, making the pictures more realistic.”

A GoPro can also be connected to a smart device and has an app in which users can edit photos and then upload them on social media. Its fisheye lens gives users a much wider panoramic field of view. Because the camera is usually used to record outdoor activities, it is waterproof and dustproof, has an anti-vibration function and is not affected by the cold.

When attached to a drone, it can fly itself for 15 minutes at 70 kilometers per hour (43 miles per hour) while shooting video. The camera automatically maintains a distance from the user and can predict the user’s direction of movement by calculating the speed using Bluetooth signals.

The tiny cameras can also be attached to a photographer’s body or to a helmet to shoot extreme sports.

The domestic action camera market is worth 10 billion won ($9.86 million), but as people take more time to pursue leisure activities, the value more than doubles every year. Industry sources predict that 30,000 action cameras will be sold this year, as demand for small digital cameras declines. 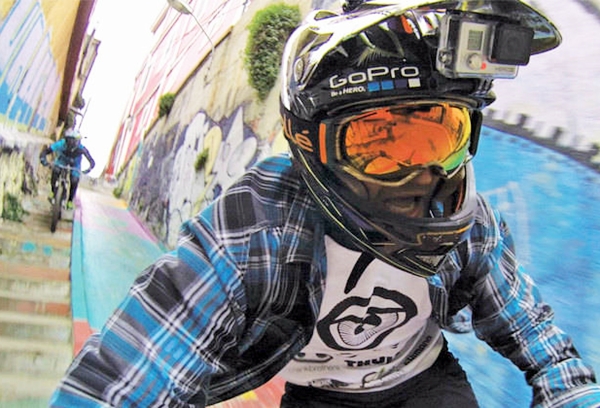 The American company GoPro is the leader in action cams domestically with about 50 percent in market share. It also accounts for 95 percent of the global market.

More than eight million GoPro cameras have been sold worldwide in the past five years and the company’s sales quadrupled last year compared to 2012, to $986 million. The company was listed on the Nasdaq last month.

As the market for action cams becomes a new growth driver for cameras, other companies such as Ion, Sony and Panasonic have launched products in a bid to challenge GoPro. The Japanese companies are looking to counter the American leader in Korea with advanced features.

Sony Korea is banking on its HDR-AS100V action cam, which shoots motion in full HD and has a wide-angle lens that shows a field of view of 170 degrees. Sony’s AS100V is for a broad range of users from general consumers to professional athletes and cinematographers.

“The domestic outdoor market has grown explosively and the demand for action cameras is increasing every year,” said a spokesman for Sony Korea.

Panasonic Korea launched the wearable action cam HX-A100, which is unique from other similar cameras because its lens is separate from the body so that users can mount the lens at face level and shoot video without using their hands.

“As it is equipped with a microphone with noise suppression, stable sound can be recorded,” said a spokesman for Panasonic. “Also, with the slow motion and time-lapse features, fast-moving scenes can be shot in high definition.”

Black box manufacturer Pittasoft released the BlackVue Sports SC 500 camera and another black box company, Amon, launched the ISAW Extreme, which can be wirelessly connected to a smartphone for video editing. Duran, a Korean outdoor camera maker, introduced the waterproof Aqua Cam, which can be submerged up to five meters (16 feet).

The three companies are looking to enter the global action camera market, which is worth 1 trillion won.

“Korean action cameras are price competitive as GoPro cameras are about 500,000 won, while Korean products are much cheaper, even though they have similar functions and are high quality,” said a research fellow at the Hyundai Research Institute.