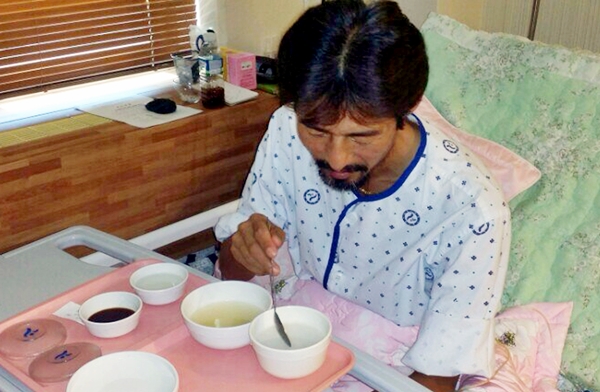 Kim Young-oh takes some thin rice gruel yesterday from his bed at a hospital in Dongdaemun District, eastern Seoul, after he stopped his hunger strike on its 46th day. [NEWSIS]

The father of a 16-year-old girl killed in the Sewol sinking ended his nearly 50-day hunger strike yesterday amid growing concerns over his health and prolonged political wrangling over the terms of a special law to probe the tragedy.

Kim Young-oh, now widely known as the father of Yu-min, who was on the Sewol for a school trip on April 16, decided to put an end to his 46-day fast due to the growing concerns of his family members, especially his second daughter, Yu-na, who pleaded with him to stop the self-destructive strike, according to an association of parents who lost their teenage children in the tragedy.

“Kim decided to end his fasting and to eat again to prepare for a long struggle [over the special Sewol probe law],” said Yu Gyeong-geun, spokesman of the association, during a press briefing at Seoul Metropolitan Dongbu Hospital, where Kim was admitted last Friday.

Yu said once Kim recovers his health he will go back to continue his round-the-clock protest for the special Sewol law. But it will not be a hunger strike.

The 47-year-old’s decision to end his hunger strike came six days after he was rushed to Seoul Metropolitan Dongbu Hospital from Gwanghwamun Square amid a decline in his condition. Six days earlier Kim had been visited at his protest site by Pope Francis, who later celebrated a Mass in the square.

Yu said Kim was not asking the opposition to stop its struggle to pass a robust special law. But he requested for opposition lawmakers to “stop their hunger strikes and return to the National Assembly in efforts to build a safer Korea,” the spokesman said.

“Kim’s demand for a meeting with President Park Geun-hye and an enactment of the special Sewol law is unchanged.”

Since Kim’s encounter with Pope Francis on Aug. 16, during which he asked the pope to support the families’ cause, Kim has become a symbol of the relatives of Sewol victims’ demand for a special probe into the ferry disaster that will be independent of political pressure from the Blue House.

Over the past week, rumors and negative comments about Kim and his hunger strike surfaced on social networking sites. His former brother-in-law accused him on an Internet portal site of neglecting his two daughters after his divorce in 2003.

Refuting such claims, Kim released bank transactions that showed he wired money to his ex-wife and two daughters. He also released captured images of chats that showed friendly exchanges between him and his daughter Yu-min.

“We hope he recovers soon and the ruling and opposition could steer the Sewol special law in a way to find a compromise through talks with the bereaved families,” said Yoon Young-seok, a spokesman of the Saenuri.

Following Kim’s decision, Rep. Moon Jae-in also decided to end his 10-day hunger strike yesterday. The former presidential candidate, who was defeated by President Park Geun-hye by a margin of 3.6 percent in the December 2012 election, went on a hunger strike last Monday in solidarity with the families.

“I began my hunger strike to dissuade Kim Young-oh from continuing his fasting out of concern for his life. Today I also bring an end to my hunger strike,” said the former presidential chief of staff under the Roh Moo-hyun government in a statement yesterday.

Moon’s 10-day strike has put him in the media spotlight in recent days in both positive and negative ways. Supporters applauded his empathy for the Sewol victims’ families. Opponents criticized him for worsening the political gridlock by joining in an extreme form of protest rather than seeking ways to reach a compromise on the Sewol bill.

Considering that he is the de facto leader of an internal faction within the New Politics Alliance for Democracy party that represents loyalists to the former Roh Moo-hyun government, there is a growing likelihood that he could vie for the party’s top post in a convention scheduled for early next year.

While the two men ended their hunger strikes, the NPAD continued its parliamentary boycott yesterday with its interim chief Park Young-sun handing out flyers calling for a three-way meeting among the two parties and the bereaved families to passersby in the crowded Myeong-dong area yesterday afternoon.

As the Saenuri and the family association failed to narrow down their differences on the special law in a meeting Wednesday - although they agreed to have a third meeting next Monday - the NPAD might return to parliament because of internal disagreement over the boycott and public opinion swinging against it.

“We have to think thoroughly before making a decision on ending a struggle outside of the parliament,” said acting party leader Park yesterday.

Though the opposition’s protests are likely to continue for the time being, it is also being shaken by internal disagreements.

Veteran opposition lawmaker Park Jie-won wrote on Twitter that his party should end the boycott and return to the National Assembly. Park’s call was echoed by 15 NPAD lawmakers.