Foreign auto companies, who have enjoyed persistent strength in the local market, have embarked on a new business to garner more Korean customers: selling second-hand cars.

On Thursday, Jaguar Land Rover Korea opened a used car shop in the Seoul Auto Gallery in Yangjae-dong, southern Seoul. This is the first time a British premium auto brand has open- ed a second-hand car shop under its own name in the Asia-Pacific region.

“It was a decision that we couldn’t avoid,” said Baek Jung-hyun, who is in charge of the company’s sales and customer service.

BMW Korea, the nation’s No. 1 imported car seller, was the first foreign brand to start a used car business. Under the brand name “BMW Premium Selection,” it started selling used cars in 2005 and now has nine outlets for second-hand vehicles.

BMW Korea buys back its models that have been driven less than 100,000 kilometers (62,137 miles) and have had accident-free records for five years. It then puts them through inspections in 72 categories, does repairs, upgrades and gives the car official certification.

Used cars certified by BMW come with a 12-month warranty and 24-hour emergency service as well as the same financing services as new cars.

Mercedes-Benz Korea is also offering certified used cars under the name “StarClass.” If a customer buys a certified used Mercedes-Benz car and experiences a problem within seven days or 500 kilometers of driving, the company will give him or her another used car in exchange.

“Even if it is used, we are aiming to offer the best quality of cars to our customers,” said a spokeswoman from Mercedes-Benz Korea. 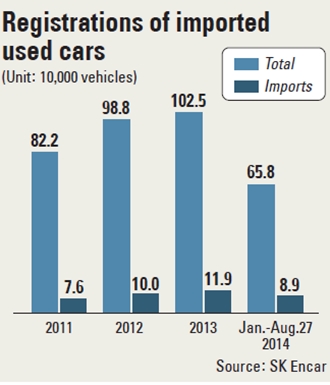 The company is not only buying back Mercedes-Benz models, but also other brands’ vehicles. It currently runs two certified used car sales shops in Korea.

Big brands like Ferrari are even offering exchanges of vehicles. Forza Motors Korea (FMK), the official importer of Ferraris, said it not only buys back and sells used cars, but also offers brokerage services between buyers and sellers.

Ferrari owners can trade their cars with each other if they agree on the terms. They can also trade their models for used Ferraris that FMK has in stock, while paying the difference, if need be. FMK offers 12-month warranties on its certified used Ferraris.

Analysts said that the foreign automakers’ certified used car business is likely to grow as it is becoming a new source of revenue for importers and dealers following the rise of sales in new imports.

“In the U.S., new car sales account for up to 70 percent of dealers’ sales, but the stable revenue comes from their used car business,” said Yoon Dae-sung, an executive director at the Korea Automobile Importers & Distributors Association. “As the local imported market has grown sharply recently and now has economies of scale, certified used car programs will likely become more active.”

However, industry insiders point out that the price of certified used cars can be a problem if they are much higher than those offered in directly arranged sales or through online used car sellers.