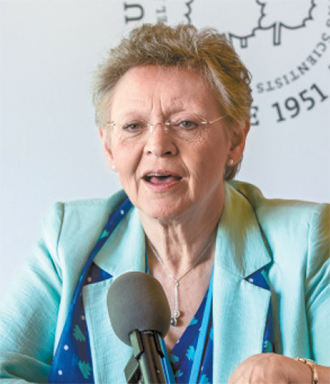 'At the 64th Nobel Laureate Meeting, Nobel Prize winners from around the world had the opportunity to present their work and interact with young researchers to share high-profile academic information on recent scientific developments.

The conference, which has been held annually since 1951 in Lindau, a small town in southern Germany, focused on bioscience this year. Thirty-eight Nobel laureates specializing in physiology and medicine were invited, along with more than 600 emerging scientists and analysts.

I conducted interviews with four Nobel laureates who attended the meeting, one of the most important venues in which the scientific community can review current trends.

This is a four-part weekly series by the Korea JoongAng Daily.'

LINDAU, Germany - In 2008, French virologist and immunologist Francoise Barre-Sinoussi and her mentor Luc Montagnier were awarded the Nobel Prize in Physiology or Medicine for their groundbreaking discovery of the human immunodeficiency virus (HIV).

Barre-Sinoussi’s work with retroviruses at the Institut Pasteur in Paris led to the discovery of HIV in 1983, and her research was integral in pinpointing the virus to be the cause and precursor of acquired immunodeficiency syndrome (AIDS).

“Viral resistance against HIV drugs may cause a re-emergence of HIV,” she said in an interview with the Korea JoongAng Daily. “That is why we have to keep investing and developing HIV drugs.”

Barre-Sinoussi currently is the director of the Regulation of Retroviral Infections Division at the institute and the outgoing president of the International AIDS Society (IAS), a private non-profit dedicated to research. IAS runs the AIDS 2014 conference in Melbourne, Australia.

The French immunologist is revered worldwide not only for her research, but also for her social activism pertaining to AIDS and HIV. I had the opportunity to talk to her at the 64th Lindau Nobel Laureate Meeting, which ran from June 29 to July 4 in Lindau, in the German state of Bavaria.

The following is an excerpt of that interview:

Q. It’s been said that AIDS is now a disease we can control after enough time, research and drug development. People who are infected with HIV can lead healthy lives. Is it true that we have almost conquered AIDS and HIV?

A. It is true that HIV infection or AIDS is now no longer a fatal disease, but one of the chronic diseases that we keep tackling through life. The United Nations has claimed that AIDS-related deaths and new HIV infections have fallen by more than a third in a decade. It is now raising new hope that the disease can be removed by 2030. It is mainly due to the scientists, researchers and activists who have fought against social prejudice, discrimination and misunderstanding.

Now what do you think is the most important thing to exterminate AIDS?

Until recently, most researchers were focused on ways to prevent the development of AIDS even after HIV infection, with [the patient] taking several anti-retroviral drugs. But afterward, it will be so much more important to prevent AIDS with vaccination. I am now stressing that around the world. We can overcome a disease not only with the power of science but also through social, institutional and political efforts. Recently, AIDS seems to be terminated and investment toward vaccination is now decreasing. But it is certain that a patient can relapse at any time. ”

What grounds do you have for that belief?

It is based on the fact that the virus tends to mutate and can easily prove resistant to existing drugs. Resistance can occur if a virus undergoes a mutation. A mutated virus is no longer affected by drugs. In the near future, we may have a re-emergence of HIV. It may appear in the form of a virus that is resistant to the current panel of anti-retroviral drugs that we use for patients. Growing numbers of AIDS patients who have had the virus replicate in their bodies can potentially experience a resurgence of the virus.

You will have patients with resistant forms, they will transmit the virus to others, and over the long term this will happen in several countries in the world. It is the reason why we have to keep researching and developing new kinds of anti-viral drugs. If we cannot overcome the resistant form of the virus, we will never conquer AIDS.

You have been the president of the International AIDS Society (IAS) since July 2012. What do you think is the most important thing to focus on?

AIDS can be exterminated when the scientific research is correctly combined with social collaboration. It is also important that people who are HIV-positive and AIDS patients are living their own lives happily in humane environments.