Speedy merger could be advantageous for Hana, KEB

Speedy merger could be advantageous for Hana, KEB 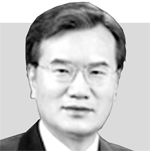 Skepticism about the Korean financial sector has reached a dangerous level. Some question any benefit from an advance in the financial industry. But such an accusation is derived from a misunderstanding of the financial sector. It is as outdated as claiming manufacturing is the only source of wealth for the economy and disregarding the role of software compared to hardware.

Despite the importance of the financial industry, returns of domestic bank assets averaged 0.38 percent, recording among the lowest on the global scale. The ratio of return on assets that indicates how profitable a company is relative to its total assets averages 1.28 percent for the world’s 1,000 largest banks. A bank of negligible scale should generate a return on assets of at least 1 percent. Local banks generate poor earnings because they primarily rely on the spread between deposits and loans for revenue and pay employees backed by strong unions handsomely. In a surprising move for the local industry where smooth mergers are rare due to strong opposition from unions, Hana Bank and Korea Exchange Bank announced that they will accelerate their merger. A speedy merger between the two banks could set a turning point for the domestic financial industry. How the two banks are managed could persuade respective unions questioning the terms for sovereignty in Korea Exchange Bank after it goes under Hana Financial Group and on other issues of disagreements could shape the future of the two banks.

Leadership of both banks could be jeopardized if Hana Bank and Korea Exchange Bank continue incurring losses. Political interference may be inevitable if the banks require leadership replacement. KB Financial Group has been shaken by an in-house feud because of clashes between the group’s chairman, who has been handpicked by the government, and the president of the bank, who has worked his way up from Kookmin Bank. Hana Financial Group could face the same fate. Revolving-door practices do not go away easily.

A fast merger is not entirely bad for Korea Exchange Bank employees. The banking industry is doing bad overall. Banks have been striving to find new revenue sources from overseas but that, too, cannot be easy. Hana Bank and Korea Exchange Bank could improve their performance through their bigger scale in the market after consolidation.

Whether they use the momentum for a breakthrough to make big strides all depends on the two banks. They must make their choices based on consumer needs. At the end of the day, it is the consumers that determine the future of the banks.

BY Lee Sang-bin, Professor of finance at Hanyang University