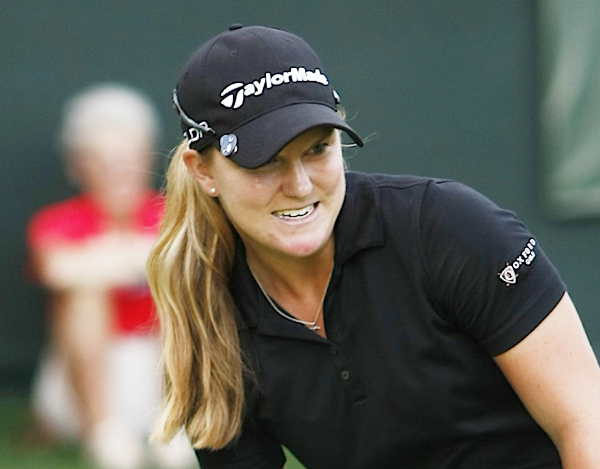 PORTLAND, Oregon - Austin Ernst won the LPGA Tour’s Portland Classic on Sunday with a par on the first hole of a playoff after South Korea’s I.K. Kim missed an eight-foot par putt.

It was the first professional victory for the 22-year-old Ernst, who shot a 5-under 67 in the final round to get to 14 under at Columbia Edgewater. Kim, the first- and second-round leader, carded a 68.

A year ago as a rookie in Portland, Ernst shot a third-round 62 on the way to a ninth-place finish. In Ernst’s mind, Columbia Edgewater was a likely place for her first career win.

“A lot of good memories coming into this year. I was very confident coming in, knowing I could make a lot of birdies,’’ Ernst said. “I knew that I didn’t have to do anything special today because I had three really good rounds to start with. Coming down the stretch, I was very proud of how I handled everything.’’

Ernst pulled into contention with a 5-under 31 on the front nine, highlighted by a chip-in eagle at the par-5 fifth. Kim made four birdies and no bogeys.

South Korean’s So Yeon-ryu and Chella Choi tied for third at 12 under. Ryu, last week’s Canadian Women’s Open winner, shot 70, while Choi had a 68.

Ernst was in control after she converted a long birdie putt at the par-4 14th to get to 16 under and a two-stroke lead. But she stumbled down the stretch, missing the green at Nos. 17 and 18, resulting in bogeys.

That opened the door for Kim and Ryu, but only Kim capitalized. At the par-4 18th, Kim missed the green long with her second shot, but chipped to three feet and made the par putt to force a playoff. Ryu, at 14 under heading into 18, made double bogey after hitting her second shot from a fairway bunker into a greenside pond.

Ernst finished about 20 minutes before Kim and Ryu.

In the playoff, Ernst rolled a 35-foot putt to within 18 inches. Kim missed the green with her second shot, chipped to within eight feet, and then missed the par putt.

Kim, a three-time LPGA winner, was bidding for her first victory since 2010. After playing the entire final round without a bogey, Kim made one during the playoff.

“I’ve been missing quite a few of those. I think it’s just the speed of the green,’’ Kim said. “I played in a lot of playoffs, but I haven’t won one yet. So it was in the back of my mind. But she deserves it.’’

At 18, Ryu was in position to win the tournament outright or earn a spot in the playoff, but her tee shot landed in a bunker. It got worse when Ryu hit her approach into the water.

The three third-round leaders faded. South Korea’s Mi Jung-hur shot 73 to finish at 10 under, while defending champion Suzann Pettersen of Norway and Spain’s Carlota Ciganda were at 9 under after 74s.