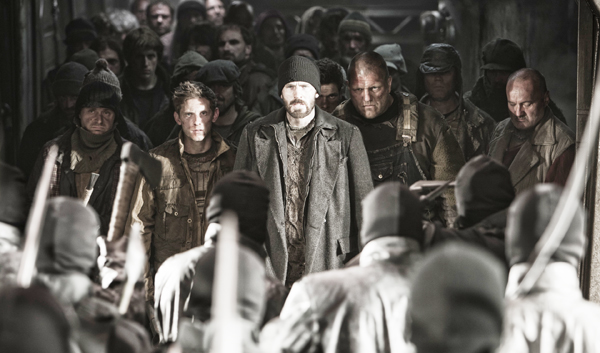 Korean film “Snowpiercer” was a cult hit in North America this summer, but mostly on VOD. [AP/NEWSIS]

The movie of the summer might have been Marvel’s irreverent hit “Guardians of the Galaxy,” the top domestic film at the box office. Or it could have been Michael Bay’s sequel-reboot hybrid “Transformers: Age of Extinction,” the lone movie to even approach $1 billion globally.

But really, the movie of the summer was “Star Wars: Episode VII.” Even though it’s not due in theaters for more than a year, no other film captured the popcorn-hunger of moviegoers quite like J.J. Abrams’ resurrection of George Lucas’ space opera. As the blockbuster-to-come went into production over the summer, every bit of casting news was eagerly consumed; every hint of its plot was carefully parsed. Nothing can stop it, not even the broken leg of an aged Hans Solo (Harrison Ford), at the mercy of a mechanical door on his trusty Millennium Falcon, no less.

When the season sputters to a close on Monday, the summer box office - regardless of whatever is added to the coffers by weekend front-runner “Guardians” - will be about 15 percent down from last year’s summer, making it Hollywood’s worst summer in at least seven years.

Why did this summer fail to ignite at the box office? Here are five take-aways:

“Maybe we had a lot of titles that looked good on paper,” says Dan Fellman, head of domestic distribution for Warner Bros., whose Adam Sandler comedy “Blended” and largely acclaimed Tom Cruise action flick “Edge of Tomorrow” found lukewarm receptions. “The audience didn’t go for it. We have to do better.” Many in Hollywood will often remind that the movies, after all, are ultimately a content-driven business. The self-mocking “Guardians,” starring Chris Pratt, and the operatic apocalyptic tale “Dawn of the Planet of the Apes” won the most cheers from moviegoers and critics alike. But many of the summer’s top releases, like the Melissa McCarthy road trip “Tammy” and the flopping neo-noir sequel “Sin City: A Dame to Kill For,” simply weren’t up to snuff. One likely best picture-nominee did emerge over the summer, though: Richard Linklater’s “Boyhood,” a unique coming-of-age film made over 12 years.

Make no mistake about it: Sequels still rule the summer. Of the top 10 films at the box office, how many do you think were original? Zero. The most popular original movie - not a sequel, reboot or adaptation of a well-known property - was the Seth Rogen comedy “Neighbors,” in 11th place. But many sequels also showed growing audience fatigue. “The Amazing Spider-Man 2” performed worse than all four previous “Spider-Man” movies. DreamWorks’ “How to Train Your Dragon 2” also didn’t rally the box office like it was expected to, and Sylvester Stallone’s “The Expendables 3” signaled the end of an already elderly franchise. Sequels are expected to stomp through the summer, but this year none surpassed $250 million domestically.

The center is shifting

Two of the top movies of the year (“Captain America: The Winter Soldier” and “The LEGO Movie”) were released in spring, usually the homely sidekick to summer’s dashing hero. And the summer’s biggest hit, “Guardians of the Galaxy,” wasn’t released until the dog days of August. “The studios are starting to realize: Let’s take advantage of the soft spots in the calendar,” says Paul Dergarabedian, senior media analyst for box-office tracker Rentrak. Not only that, they’re also increasingly focusing overseas. “Transformers” was launched not in North America but in China, where it was also partially shot. And it was rewarded for it: The film made more money in China than in North America. Even the summer’s cult hit, the futuristic allegory “Snowpiercer,” was a distinctly international production made in South Korea and largely seen not in theaters but on video-on-demand.

The summer was missing a few of its expected tentpoles that by themselves could have moved the needle on the overall box office. Following Paul Walker’s death, “Fast & Furious 7” was postponed until next year. Pixar didn’t have its usual summer entry. But overall, the studios are largely pulling back on their output, concentrating resources on fewer but bigger films. This has meant slightly less competition in the summer and more carefully guarded profit margins. The summer may have been down at the movies, but the studios had fewer high-profile bombs than they did last year, a record-setting but volatile summer. (Remember “Lone Ranger”?) Instead, the studios downshifted for more dependable results. Budgets may look fine in Hollywood, but they don’t look as good for theater owners.

Get ‘em next year

“It’ll happen next year,” says Universal distribution head Nikki Rocco. “The business is cyclical.” The hope is that the constant ebb and flow of the movie business will next year tilt back toward the box office. The year boasts arguably the two most lucrative franchises in movies: “Star Wars” and “Avengers.” When “Avengers: Age of Ultron” kicks off on May 1, nothing less than record-breaking will be expected. The first “Avengers” film in 2012 was the highest grossing summer movie ever. It won’t be until December that “Episode VII” hits theaters, but nothing proves more than “Star Wars” that franchise fervor springs eternal.