Inflation down to 1.4% in August

Inflation down to 1.4% in August 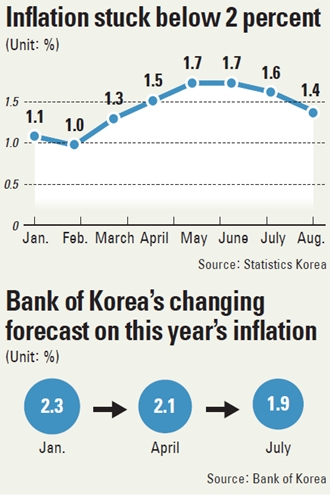 Korea seems stuck in a low period of inflation after consumer prices retreated for the second consecutive month and inflation has remained below 2 percent for almost two years.

Although the probability is slim, the low inflation rate since late 2012 has raised concerns over whether Korea is heading into a deflation similar to what Japan has endured for two decades.

According to Statistics Korea, consumer prices increased 1.4 percent last month compared to the same month last year. This was down from a 1.6 percent year-on-year growth posted in July.

Even when the nation suffered a heavy blow from the Asian financial crisis in the late 1990s, the inflation rate only stayed below 2 percent for 14 consecutive months, from January 1999 to February 2000.

When compared to other economies, Korea’s inflation growth is low. The average consumer price growth of the 34-member OECD countries is 2.1 percent.

As inflation growth remains low, there have been doubts about the central bank’s ability to anticipate the situation. Since the beginning of the year, the Bank of Korea (BOK) has consistently missed the mark on this year’s inflation growth outlook.

In January, the BOK predicted that sentiments would improve due to an economic recovery and it projected that the inflation rate would settle at 2.3 percent by the end of the year. That view was revised down to 2.1 percent and again to 1.9 percent. There are already speculations that the central bank might lower the forecast one more time when it announces its fourth economic outlook next month.

The biggest concern over the decreasing inflation rate is whether Korea could enter a period of deflation as Finance Minister Choi Kyung-hwan mentioned last month.

The minister said that there were similar signs: low growth, low inflation and an excessive current account surplus that Japan witnessed during its two decades of economic deflation.

Core inflation, which excludes the prices of agricultural and petrochemical products that are sensitive to external variables, reported the biggest increase year-on-year since a 2.5 percent rise in February 2012 to 2.4 percent last month.

And the biggest contributor to the recent drop in overall inflation was agricultural prices. Although the price of fresh produce rose 4.2 percent compared to July, it fell 11.8 percent year-on-year. The price of vegetables plunged 19.1 percent and fruit prices fell 12 percent, largely because of the stable weather.

With prices at such a low level, consumers could be encouraged to increase their spending, which has been considered a major factor in advancing the economy.