Students in Gyeonggi get new starting time for class

Students in Gyeonggi get new starting time for class 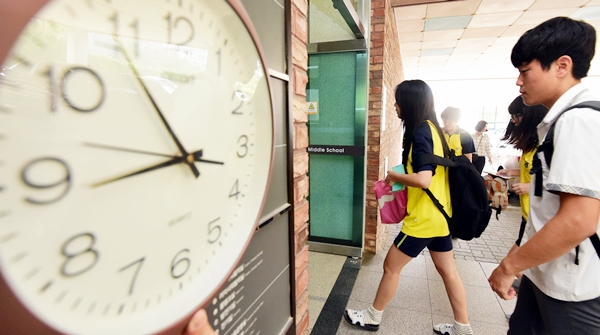 Students arrive at Maetan Middle School in Suwon just before 9 a.m. on Tuesday. From Monday, many schools in Gyeonggi begin at 9 a.m., 30 to 60 minutes later than before. [NEWSIS]

The province wants the kids to get more sleep, have breakfast with their families and generally feel less stress.

Students overall seemed to appreciate the later start, but many adjustments had to be made.

Most students came to school right on time, and some were early.

On Monday, several students at Dukyang Middle School in Goyang, Gyeonggi, were playing basketball at the school at 8:15 a.m. They were in no hurry.

“I slept enough and I could have breakfast with my family,” said Kim Ji-min, a seventh grader of the school.

At 8:30 a.m., entrances to many schools started to become crowded.

Some students who take buses to school complained about the change.

“I had to come to school during the rush hour and I’m late because the bus was packed with people,” said Yang Su-jin, an 11th grader in Taejang High School in Suwon, Gyeonggi.

When classes at Taejang High School ended at 6:20, half an hour later than usual, some students had to hustle.

Some students who go to cram schools went so far as to skip their last classes to be able to get there on time. Kids who worked part time after school didn’t like the change either.

“Now I’m going to get less pay because the school ends late,” said an 11th grader. “It’s unfair that [the education authority] did not listen to opinions of some students like us.”

Some parents opposed the measure.

“I used to take my son to school when I go to work at 7:30 a.m.,” said Choi Mi-yeong, 47, a parent living in Bundang, Gyeonggi. “Today, I just woke him up before I left. I don’t know if he had breakfast before going to school.”

Twelfth graders, who will be taking the college entrance test in two months, were excluded from the change because the test starts at 8:10 a.m. and schools didn’t want them to get used to sleeping later.

More than 300 schools did not change their hours because students and parents opposed it.

“They are complaining that schools end late now, but it is the cram schools that have to adjust their time schedules,” said Han Gu-ryong, head of the curriculum support department of the Gyeonggi Provincial Office of Education.