Renault Samsung hopes for a lift from SM7 Nova

Renault Samsung hopes for a lift from SM7 Nova 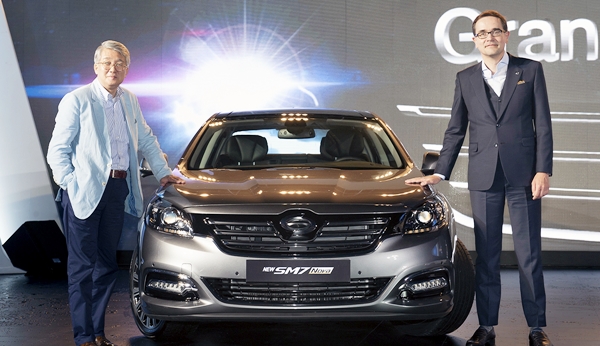 The Korean unit of French automaker Renault on Wednesday introduced a facelift version of its second-generation SM7 in Busan.

RSM claimed the SM7 Nova will offer a different type of value than other rivals, notably the Hyundai Grandeur and Aslan, the new premium sedan to be released this year.

“I think Grandeur, Genesis and Aslan are the models targeted for the American market instead of the domestic market,” said Park Dong-hoon, RSM’s executive vice president for sales and marketing, on Wednesday. “Renault doesn’t have 3,000cc models, but since there was a need for large cars in the Korean market, the SM7 Nova was developed solely for Koreans.”

For tech-savvy Koreans who are always on their smartphones, RSM said the SM7 Nova is equipped with a “smart mirroring” system that allows navigation information, music or video data in the smartphone to be displayed on the car’s center console using a special application.

RSM is the first local automaker to use Wi-Fi to connect smartphones with the car’s infotainment system. Others use Bluetooth.

The company also it is the first local automaker to use magnesium sheets on the body of mass-produced cars. The magnesium parts are used for edge of the sedan’s backseat and trunk, weighing only 1.4 kilograms (three pounds), which is 2.2 kilograms lighter than existing metal sheet parts.

RSM hopes the facelift version will turn around domestic sales of the SM7. Since the release of the second-generation model in August 2011, sales have been plunging.

“The reason this car wasn’t successful after its debut in 2011 was that we lacked confidence and didn’t trust ourselves, not because of design or performance,” Park said. “We are currently educating our salespeople in a new concept of sales and this will bring another difference.”