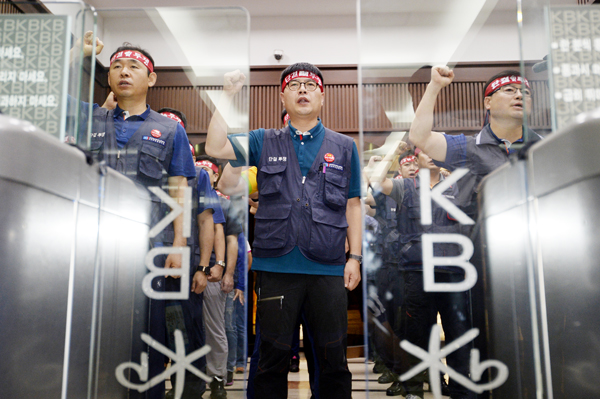 The Financial Services Commission (FSC) is expected to confirm the level of punishment it will dole out to KB Financial Group Chairman Lim Young-rok next Friday to end a boardroom feud at the group and help normalize the operation of the financial institution as soon as possible.

FSC Chairman Shin Je-yoon said yesterday that the commission will hold a plenary meeting soon to discuss the issue.

“The commission should prepare for a general meeting as soon as possible to help normalize operations at KB Financial Group,” Shin said in a meeting with senior officials.

The vice chairman of the FSC, the vice minister of strategy and finance, the vice governor of the Bank of Korea, the CEO of Korea Deposit Insurance Corporation and the governor of the Financial Supervisory Service (FSS) will attend the meeting.

Lim could be barred from landing a job in the financial sector for three to five years, a penalty the FSS recommended on Thursday that the FSC impose. The FSS also announced on Thursday punitive action for Lee Kun-ho, the former CEO of Kookmin Bank, whose ideas directly contrasted with Lim’s. Lee immediately announced his resignation.

Given that Shin emphasized the “early normalization of KB,” it is highly likely that the FSC will accept the FSS’s proposal.

The FSS said Lim seriously damaged the group’s operations and public trust by causing the in-house feud and not taking responsibility for it.

The argument was sparked in April when the bank’s CEO requested that the FSS investigate the bank’s decision to switch its computing system from IBM to Unix, citing the manipulation of data that was used in the board’s decision making.

The investigation found that the bank’s executives altered a report on the computer system change written by an outside consulting firm to favor Unix, then reported it to the board. It also showed that Chairman Lim was aware of the risks and problems that would occur if the bank adopted Unix, though he did not take any action.

If the FSC accepts the FSS’s proposal for heavy punishment, Lim may face pressure from authorities to step down. However, in an official statement released on Thursday, Lim showed no intention of resigning.

“I will do my best to prove the truth through the appropriate process,” he said.