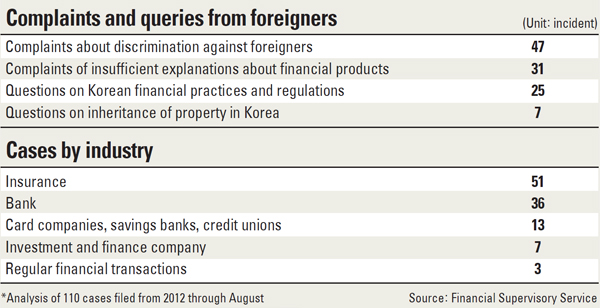 There are nearly 1.6 million foreigners living in Korea, where they work, save, do their banking and receive credit cards. However, dealing with financial institutions is their No. 1 gripe.

A 29-year-old Nepalese, who wanted to be identified as Mr. B, lost his wallet in May. Before he could report it to the bank, about 600,000 won ($585) had been withdrawn from the account via check card transactions.

In such cases, the law requires card companies to reimburse cardholders for up to 60 days’ worth of unauthorized transactions.

However, Mr. B was eligible to be reimbursed for only half of his losses because he had not signed the back of his card.

“There are many cases in which foreigners end up with financial losses largely due to language problems,” said an FSS official. “They complete financial transactions without fully understanding the details.”

A 31-year-old American, Mr. H, was hospitalized earlier this year after a car accident. While hospitalized, he requested Western meals. When he later applied for reimbursement, the insurance company refused because “Western-style meals are not a usual hospital meal provided in Korea.”

“Isn’t it obvious that a Westerner would eat Western-style food?” asked Mr. H, who has sued the insurer.

Some foreigners are denied loans and insurance coverage because the length of their stay is too short, and requirements vary from company to company.

In April, a group of women who moved to Korea to get married finally succeeded in subscribing to a health insurance program after filing a complaint with the FSS.

Of the 110 cases, three in 10 involved financial product transactions in which customers received insufficient information or ended up with products they didn’t want.

Some foreigners incurred financial losses by buying high-risk bonds. Some registered for insurance thinking it guaranteed payment for hospitalization until age 80, when it was only until 60. In the process, the insurance salesperson signed the name of the foreigner on the contract.

“Foreign residents have to make sure to complete financial transactions only after receiving adequate and accurate information at the headquarters of financial institutions and the FSS,” said Jeong Joon-taek, director-general of the FSS conflict mediation department. Analysts also pointed out that local financial institutions should invest more in expanding interpretation services and creating financial service manuals for expats.