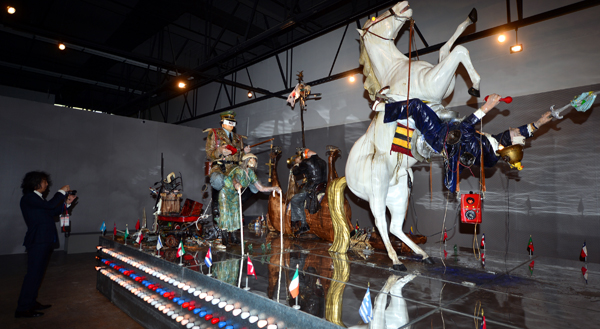 “The Ozymandias Parade,” an installation by Edward Kienholz and his artistic partner and wife Nancy Reddin Kienholz, is part of the 2014 Gwangju Biennale, which kicked off on Friday. The work, which bluntly ridicules military and political powers, is one of those recommended by Jessica Morgan, the biennale director. [NEWSIS]

The stoves, made by American contemporary artist Sterling Ruby, reflect his long interest in “the process of destruction and renewal occurring both naturally and through rampant consumerism,” according to Jessica Morgan, the director of this year’s Gwangju Biennale.

So, Ruby’s work is both literally and symbolically linked to the aggressive title of the biennial’s 10th edition, “Burning Down the House.”

The exhibition explores “a cycle of obliteration and renewal evident in aesthetics, historical events and an increasingly rapid exchange of redundancy and renewal in commercial culture,” Morgan, the Daskalopoulos curator of international art at the Tate Modern in Britain, said Wednesday in a preview of the biennale in Gwangju.

“Burning Down the House” can have multiple, diverse meanings. It can mean resistance to old customs, including roles inside a family, or political protests such as the May 18 Democratic Uprising in Gwangju in 1980, or consumption trends.

The 10th Gwangju Biennale makes a bold attempt to encompass all these issues through works by 105 artists from 39 countries, including 35 new commissions.

“Gallery 1 presents works that explore the relation of the body and the individual subject to situations of duress and struggle, while Gallery 2 reflects on the rapidly increasing consumer culture of Asia and the resulting dislocation from material production,” Morgan said.

In Gallery 1 is Korean artist Lee Bul’s grotesque “soft sculpture” suit, which looks like a hermaphrodite monster. She wore it and walked around the streets in performance to protest fixed ideas about gender in the late 1980s and early 1990s. A film of the performance is also being screened in the gallery.

The exhibits in Gallery 1 also include “The Ozymandias Parade,” an installation by American artist Edward Kienholz and his artistic partner and wife Nancy Reddin Kienholz, which bluntly ridicules military and political power. 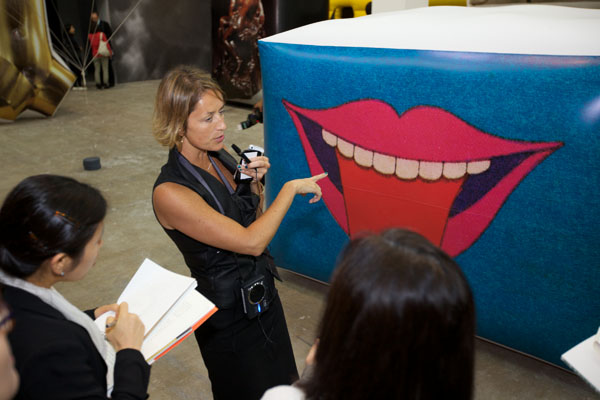 Jessica Morgan is the director of the 10th edition of the Gwangju Biennale.

In Gallery 2 is Korean artist Lee Wan’s installation “If Given a Chance, I Do Refuse It.” It is composed of 30 abandoned cheap objects, including a clock and plastic bowl that Lee collected from various areas of Seoul, and 30 video monitors, which show records of the moments when the artist first saw them.

“The objects might have dreamed of being reincarnated into a better object, but I have made them my artwork, breaking samsara (the eternal cycle of birth, death and rebirth) and giving them nirvana,” Lee told the Korea JoongAng Daily.

Meanwhile, Gallery 3 “takes the architecture of the house and the fragmented urban landscape,” according to Morgan.

American artist George Condo’s distorted human head sculpture and Austrian fashion designer Carol Christian Poell’s horse sculpture stand inside the rooms of a giant installation by Swiss artist Urs Fischer, with wallpaper that makes the interior appear to be that of an ordinary house.

The 10th Gwangju Biennale touches on nearly every issue. The range of concepts and messages in the exhibits are wide, encompassing politics, gender, consumption and aesthetic issues. The general impression of the biennale is somewhat vague, although there are some eye-catching works.

Some artworks reflect the exhibition’s title “Burning Down the House” quite literally. Those works include Argentine artist Eduardo Basualdo’s “The Island,” which is a scaled-down house constructed from the burnt remnants of a building in Buenos Aires; and British artist Cornelia Parker’s “Heart of Darkness,” an installation comprising charcoal fragments from a forest fire.

On the other hand, some works such as Paris-based duo Cecilia Bengolea and Francois Chaignaud’s performance “Sylphides” are loosely linked to the theme. The performance itself, in which dancers repeat transformations between inanimate objects and humans, is fascinating. But many people could remain curious about why they see the performance here. 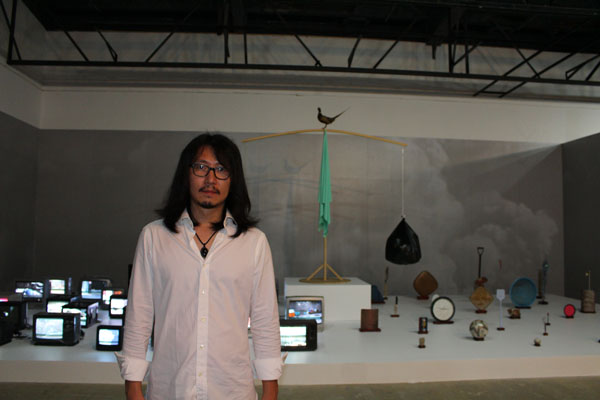 Artist Lee Wan poses in front of his work.

“I like the show; the works are very carefully and effectively installed,” said Yoo Jin-sang, an art critic and professor at Kaywon University.

However, art critic Ban E-jung disagreed, saying the theme was “too broad.”