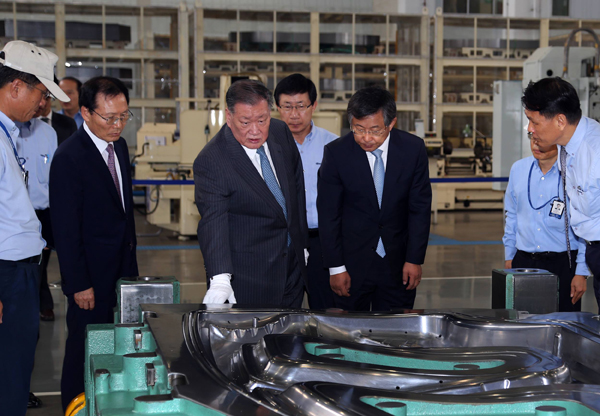 Hyundai Motor Group Chairman Chung Mong-koo, center left, checks the assembly line for the new i20 city car at the company’s plant in Chennai, India, on Sunday. Provided by the company

For Hyundai Motor Group Chairman Chung Mong-koo, this year’s Chuseok was just like any other day of work.

While most Koreans went to their hometowns to see relatives and friends, Chung was out of the country, visiting Hyundai Motor’s plants in India and Turkey to check whether the company’s production and sales strategy for its small cars is on the right track.

“Chung’s business trip to India and Turkey is to check the quality of their localized models following the strategic role changes of two plants,” the company said in a statement.

“The India plant, which was the forefront export base to Europe, has changed its role to focus on the domestic market, while the Turkey plant has reinforced its role as a European mini car production base.”

Hyundai has been implementing a two-track localized strategy centered on its plants in India and Turkey. Both make i10 and i20 city cars, but although the vehicles share the same body and design their sizes and various interior features differ. And according to Hyundai, the changes on the new i20 will make them even more distinct.

The world’s fifth-largest automaker said its plant in Chennai, India, stopped shipping to Europe about two months ago. The region used to be Hyundai Motor India’s largest market, with 40 percent of its exports shipped there.

“The best competitiveness comes from thorough localization,” said Chung, who left for India on Saturday. “We also need to secure emerging markets like the Middle East and Africa with the Indian and Turkish plants serving as an axis of localization.”

For the first part of his schedule, Chung visited the production line of the India plant on Sunday to check the quality of the new Elite i20, which began mass production just last month. It was his first time to India since 2010.

Chung said that the Chennai plant should focus on supplying a “market-dominating product” for India in order to expand Hyundai’s presence there.

“The Indian market recently started to recover,” said Chung. “The new i20 is the first product from the India plant with its changed role, and with a localized sales strategy we should secure a clear advantage in this market.”

Expecting economic growth from India’s large population, Hyundai set up a production base there in 1998, churning out models like the Santro, EON, i10 and i20, and becoming the country’s second-largest automaker.

The Indian passenger car market last year suffered a decline for the first time in 11 years because of expensive gas prices, and high interest and currency rates. According to data from the Society of Indian Automobile Manufacturers, passenger car sales dropped 9.6 percent year-on-year to 1.8 million units.

But with the new Indian government extending consumption tax deductions until the end of this year, Hyundai expects that India’s entire auto market will grow by 2.7 percent.

Korea’s largest automaker has had success so far this year after selling 269,025 units in the first eight months, up 7.1 percent from a year ago - far above the industry average of 1.4 percent growth.

After India, Chung visited Hyundai’s Turkish plant in Izmit yesterday, emphasizing that the production base established there in 1997 has been given a more important role. It is now regarded as Hyundai’s forefront production base along with its plant in the Czech Republic.

The automaker invested more than $600 million to double the plant’s annual capacity to 200,000 units last year. The plant is set to roll out a new i20 localized for Europeans next month.

“In order to make the Turkish-made i20 lead the European market, we should put our best effort forward to have premium production quality,” Chung said.

The European-style i20 is scheduled to be revealed at the Paris Motor Show next month. Hyundai said that it will be more “luxurious” than the Indian-made i20. Hyundai is hoping for the new i20 to boost its sales in Europe. The automaker has been struggling in the continent, selling 219,617 vehicles in the first half, down 2.4 percent from a year ago according to European Automobile Manufacturers’ Association data.

“This year, both the plants in India and Turkey are expected to deliver performances better than our original annual goal,” the spokesman from Hyundai said.

“With exports from Korea struggling because of industrial action from the union, expanding sales from overseas will play an important to role in achieving the company’s global sales goal.”