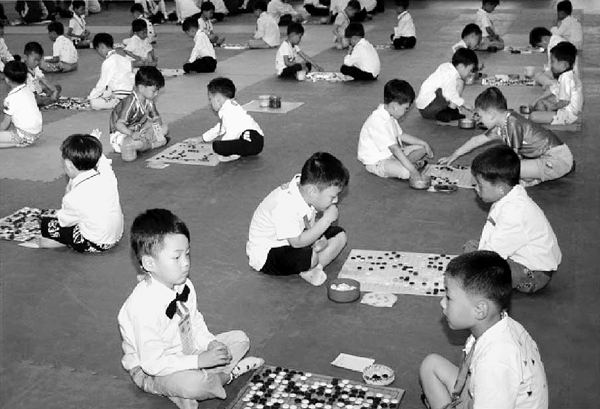 In this photo from Chosun, North Korea’s propaganda magazine, children play baduk during an amateur competition. The ancient board game has recently experienced a boom in popularity in North Korea, and many parents have cited its positive effects on brain development. [JoongAng Ilbo]


Baduk, the ancient board game that originated in China, has become all the rage in North Korea, particularly among young children, media of the reclusive Communist country have reported.

Of the 24 million people residing in the North, about 30,000 play baduk, according to reports. Many of them are children because the game is considered a great means of brain development, said Ri Hyon-ok, a teacher at the Pyongyang Baduk Club.

The game, also called go in Japan, is designed for two people and mostly based on strategy, wherein each player takes turns placing black and white stones on different points on a grid. The objective is for one person to overtake his or her opponent by commanding a larger area on the board.

The player who occupies more of the “house” is deemed the winner.

In a testament to its newfound popularity, the August edition of the North’s propaganda magazine, Chosun, included a feature on the board game’s boom: A two-page spread contained photos of baduk players at parks, in resorts and in club houses.

The article even mentioned how kindergarteners had started to learn its rules.

But despite its recent trending in the North, baduk used to be prohibited until the late 1980s, seen as a vestige of a feudal society and criticized as an unproductive capitalist pastime.

Baduk only became accepted in the country after the government declared it a folk game in August 1989, and the Baduk Association of the Democratic People’s Republic of Korea - the state’s formal name - was established around the same time.

The association was originally under the North’s sports organization, but it soon came under the charge of the nation’s Taekwondo Association at the behest of Kim Jong-il, North Korea’s leader at the time. Kim reportedly issued a special order to the Taekwondo Association to use its rather abundant financial resources to nurture baduk players, and the board game soon earned the nickname “brain martial arts.”

In 1992, Moon Yong-sam became the first North Korean player to attend an international competition, playing at the World Amateur Go Championship that year. The North joined the International Go Federation in 1995.

Outside observers said the reclusive regime decided to focus on baduk as part of an effort to end its isolation in the international community after the fall of the Soviet Union and eastern Communist countries and strengthen its ties with China and Japan through sports.

In both Asian nations, the board game has an expansive history.

Now, Moon, who started playing the game at age 10, is perhaps the most famous baduk player in North Korea. The 37-year-old ranked 14th in his debut in the global arena in 1992. Just a year later, he placed sixth in the World Amateur Go Championship.

Choe Eun-a, now 30, also dominated the North Korean baduk community within six months of her debut in 1991. The next year, she placed eighth in the Women’s World Amateur Go Championship. She was just 7 at the time.

The most recent star to emerge is 27-year-old Cho Dae-won. He started playing at age 5, and won his first level as an advanced amateur just six months later. He is currently a level seven on a scale where eight is the highest for a non-professional player.

In October, he won the Hangzhou International Cities Go Competition, becoming the first baduk player in North Korea to earn the honor of the People’s Athlete.

With an increase in the number of young prodigies becoming international game stars, more North Korean parents are paying special attention to educate their children. Shinwon Go Club in Pyongyang is known as an elite school for teaching the game, according to state media.

The North has also developed its own computer software for baduk. Eunbyul, developed by the Samilpo Information Center under the country’s Korean Computer Center, made its global debut in 1997. The software won the Computer Go Competition for four consecutive years, defeating other programs developed worldwide. Interested parties were also surprised to learn that the average age of the five developers of Eunbyul was just 26.8.

A decade ago, the board game was used as a means of inter-Korean exchange.

In 2004, seven South Korean amateur baduk players visited Pyongyang to attend a competition. The two Koreas agreed to cooperate further but no progress has been made since.