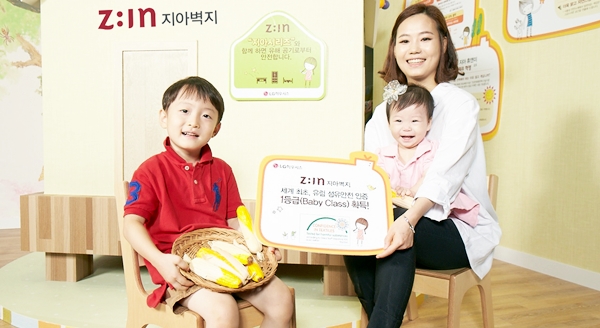 LG Hausys, a major construction-materials manufacturer under LG Group, said that its Z:IN wallpaper received a seal of approval on the Oeko-tex Standard 100, an independent testing and certification system for raw materials and textile products.

According to the LG Group affiliate, this is the first time that a construction material has received a top rating.

The company said that the Oeko-tex Association, a union of 16 renowned textile research institutes in Europe and Japan, gave its wallpaper a Baby Class rating, given to a product deemed safe for infants 2 years or younger.

Unlike other wallpapers that are manufactured with petrochemical resin polyvinyl chloride (PVC), a petroleum-based resin and common plastic, LG Hausys said that its wallpaper is made of polylactide (PLA) that is extracted from corn.

According to the company, its Z:IN wallpaper was also proven safe for use around patients with allergies and skin sensitivities in a test conducted by Seoul National University Bundang Hospital and Korea Land and Housing Corporation.