North’s athletes fly in to Incheon

North’s athletes fly in to Incheon 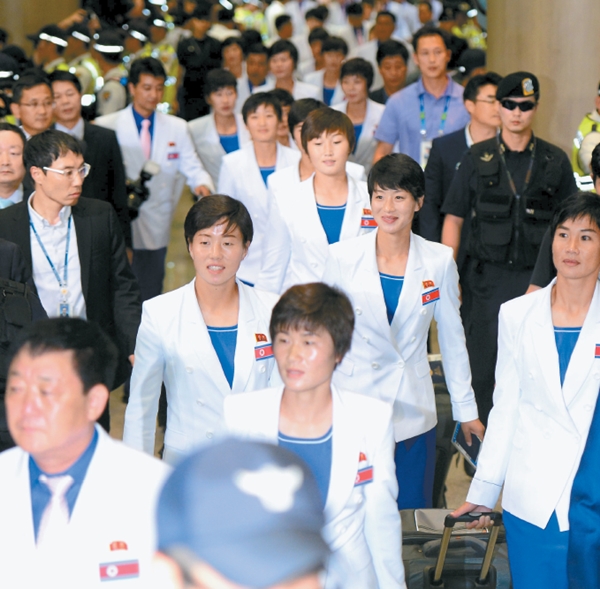 The first group of North Korean athletes competing in the Incheon Asian Games arrived in the South yesterday accompanied by senior sports officials.

The members of the North’s national team arrived at Incheon International Airport yesterday evening via their homeland’s airline, Air Koryo. The team of 94 included Jang Su-myong, a senior representative of North Korea’s Olympic Committee and vice minister of sports, as well as other management officials, referees, doctors and journalists.

Four more groups of the 273-member national team will follow.

In addition to Jang, five more Olympics officials including Kim Yong-hun, chairman of the North’s Olympic Committee, will come to the South. Kim - who served as deputy department director of the Central Committee of the Workers’ Party of Korea, the leadership body of the North’s ruling party - was named the North’s sports minister in May.

Kim is scheduled to arrive Tuesday with the second batch of athletes.

The new sports minister will be the highest-ranking North Korean official to visit the South in years. In 2009, two senior officials on politics and South Korean affairs - Kim Ki-nam and Kim Yang-gon - attended the funeral of former President Kim Dae-jung.

The initial team was escorted by police to the athletes’ dormitories in Incheon’s Namdong District to spend its first night in the South.

The athletes in the first group include 20 male and 18 female soccer players. North Korea’s soccer teams are scheduled to have their first games in preliminary matches before the Incheon Asian Games’ official opening on Sept. 19.

Meanwhile, national flags of all countries participating in the Games were removed from public spaces and streets around sports stadiums in Incheon and other nearby cities after controversy flared over publicly displaying North Korean flags.

Starting last week, the organizing committee hoisted flags of the 45 participating nations - including North Korea - on the streets of major event venues in Incheon and nearby cities.

Conservative groups lodged complaints about the North Korean flags flying near Goyang Sports Stadium in Gyeonggi, and the committee decided to remove all flags from public spaces.

“Only the flags of the Olympic Council of Asia and the emblem of the Incheon Asian Games will be raised, while national flags of the participating countries will be hoisted inside the stadiums,” a senior Unification Ministry official said yesterday.

“Until now, the government and the organizing committee tried hard to prevent unnecessary conflicts in the South,” said the ministry official. “To manage this international event smoothly, we decided to display flags of the possibly controversial country only at official venues, including the athletes’ dormitories and stadiums.

“It was a decision to prevent a wasteful, unnecessary controversy,” he said. “You cannot rule out the possibility that North Korean flags would be taken down and destroyed.”

The official refuted criticism that the government has violated the regulations of the Olympic Council of Asia, noting that national flags are properly hoisted at official event venues.

There are precedents for North Korean flags being flown on the streets of the South during international sports events: during the Busan Asian Games in 2002 and Summer Universiade in Daegu 2003.