Koreans’ preference for sons a thing of the past

Koreans’ preference for sons a thing of the past 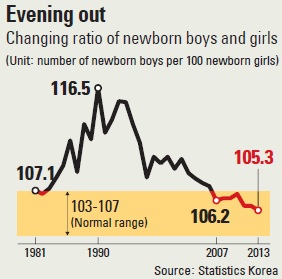 Lee Bok-ja, a 59-year-old mother of three daughters living in Seoul, said she enjoys the envious praise of her friends these days. But it wasn’t always so: Lee said she used to feel the pressure of the Korean families’ deeply rooted custom of favoring boys over girls.

Now it’s having daughters that makes her feel proud.

Lee’s daughters all graduated from good schools and found stable jobs, she brags. Her eldest daughter and son-in-law are very dedicated to family affairs, she says, as are her two youngest.

“Whenever I hear news about horrible abuses in the military, I feel so fortunate that I only had daughters,” Lee said.

Park Gwan-su, a 49-year-old mother of two sons in Daegu, is in the opposite situation. Whenever her friends brag about the gifts they received from their daughters for their birthdays and wedding anniversaries, Park feels upset.

“Sons often forget those celebrations,” she said. “Older women who dress nicely are almost always mothers who have daughters. I regret so much not having a daughter.”

Like most Asian lands, Korea used to be a country that favored sons over daughters. That tradition is a thing of the past, recent statistics by the government demonstrate.

According to a report by Statistics Korea on birth data, 105.3 boys were born for every 100 girls last year. The ratio is the lowest ever since the government started keeping track of the sex ratio at birth in 1981.

Statistics Korea said the sex ratio at birth was the highest in 1990 when it reached 116.5 newborn boys for every 100 girls. Since then, it continued to fall, reaching below 110 in 2003 for the first time.

Experts say it is a natural change in a modern society. Boys are no longer solely responsible for taking care of their parents as they age, and girls don’t disappear from their parents’ lives once they marry.

“Families became less desiring of sons because working mothers have increased in number, and they have come to prefer daughters,” said Dr. Kim Nan-jue at the Korean Women’s Development Institute. “And women’s say about family issues has also become stronger.”

Statistics also showed why parents are no longer determined to have sons - and actually may prefer daughters for a range of reasons.

Women are increasingly showing stronger performances in schools. According to 2009 data, 82.4 percent of female students entered university compared to only 81.6 percent for male students. Last year, the gap widened further to 7.1 percentage points: While 74.5 percent of women managed to get into universities, only 67.4 percent of men did so.

The gap in academic performance translated into career success. In the 2010 foreign service exam, 60 percent of the applicants accepted were women. Last year, 59.5 percent of successful applicants were women.

“When you select candidates based on their performances alone, women are often in the majority,” said a human resources official of a conglomerate.