CJ chairman is given jail time

CJ chairman is given jail time 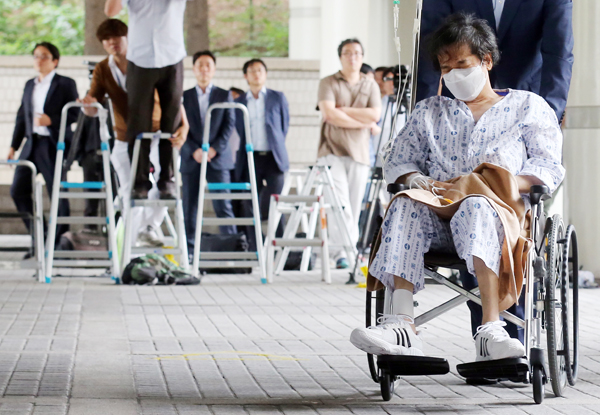 CJ Group Chairman Lee Jay-hyun is pushed in a wheelchair into the Seoul High Court in Seocho-dong, Seocho District, southern Seoul, yesterday to hear the verdict of his appeal trial. By Kim Seong-ryong

An appeals court yesterday sentenced CJ Group Chairman Lee Jay-hyun to prison for a series of financial crimes, despite his poor health and a plea for leniency from some of his powerful relatives.

The Seoul High Court found Lee, head of the country’s 14th-largest conglomerate, guilty of embezzlement, breach of fiduciary duty and tax evasion. The 54-year-old tycoon was sentenced to three years in prison and was ordered to pay a fine of 25.2 billion won ($25.35 million).

The court, however, did not send the tycoon directly to jail, citing his poor health. Lee received a kidney transplant in August last year and is in a hospital.

Citing his health, Lee’s relatives, who are members of the nation’s biggest conglomerates, sent a petition to the Seoul High Court last month seeking leniency. Among those who signed the petition was Jay Y. Lee, vice chairman of Samsung Electronics and the son of Samsung Chairman Kun-hee.

They made a plea for mercy citing the CJ chairman’s poor heath and also pointed out that his imprisonment would harm CJ Group.

While upholding most of a lower court’s ruling, the Seoul High Court reversed some of the earlier embezzlement convictions. It said Lee’s creation of slush funds could not be automatically regarded as embezzlement. The appeals court also acquitted Lee on some of the charges of breach of fiduciary duty and tax evasion.

In the latest ruling, the court concluded that Lee embezzled 11.5 billion won and evaded 25.1 billion won in taxes. The court also found that he caused 30.9 billion won of damage to CJ Group through his breach of fiduciary duty.

The prosecution indicted Lee in July 2013 on charges of embezzlement, breach of fiduciary duty and tax evasion, claiming that the total amount of money involved in his crimes was 160 billion won.

As the Seoul High Court acquitted Lee on some charges, it handed down a lesser punishment to the tycoon. The Seoul Central District Court handed down a four-year jail term to Lee in February.

Although the law allows a prison term of up to three years to be suspended with probation, the court did not suspend Lee’s sentence.

The court, however, handed down yesterday suspended prison terms to other CJ executives who were convicted in the same case. CJ Group said it will appeal the rulings.

“Lee’s health condition is so serious that imprisonment is like a death penalty to him,” said a CJ official. “It is regretful that the court handed down a jail term. The group will also face unavoidable obstacles in its business and investment without his management.”