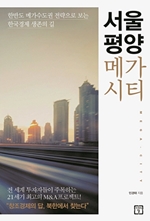 Jim Rogers, the chairman of Rogers Holdings and a legendary American investor, said in a recent interview that he would put all of his money into North Korea.

Given that his portfolio gained 4,200 percent in the 1970s and that the famed guru has traveled to 116 countries in three years starting from 1999, the reclusive regime could actually be an attractive place to invest.

North Korea is one of the very few remaining countries on Earth defying capitalism. To a financier, it’s an unexplored land. Considering the large work force and abundant natural resources in the Communist state, once money is poured in, it could grow and bear fruit at a very fast speed.

And if the unexplored city of Pyongyang and highly advanced metropolis of Seoul join forces, it could make the investment opportunity even more appealing.

The new book, “Seoul-Pyongyang Megacity,” explores this idea by proposing a “mega metropolitan region” combining Seoul and Pyongyang. Its author, Min Gyeong-tae, used to work in the construction sector and obtained a doctorate in economics and IT at the University of North Korean Studies.

Some may challenge his idea, citing current uncertainties concerning Seoul-Pyongyang relations. But Min argues that we don’t need to wait for problems on the political and diplomatic fronts to be solved. In fact, economic exchanges could pave the way to fix those issues.

Min compares his vision to an M&A between a large conglomerate and a small or midsize enterprise. Needless to say, Seoul is the former and Pyongyang is the latter. While Seoul helps Pyongyang grow and gain international competitiveness, Pyongyang provides support such as labor.

If Min’s plan makes you think of the Kaesong Industrial Complex, you might want to think again. The author is proposing to use a high-speed railway and the Internet to connect the South and the North, setting up infrastructure for transport, communication and energy. Through the connection, the North would also have easy access to the South’s advanced capital, technology and information.

Such a regional economic bloc, Min says, has the potential to become a hub not just for Northeast Asia but the world. The South’s Incheon International Airport is in proximity and so are the North’s Nampo and Haeju ports.

The author is well aware that in order for such a megacity to be formed, there will be challenges such as resolving political uncertainties in the North, attracting foreign investors and inducing support from nearby countries. The idea is a dream at this point, but the book is suggesting we give that dream a chance.