Is digital music on the wrong track?

Is digital music on the wrong track? 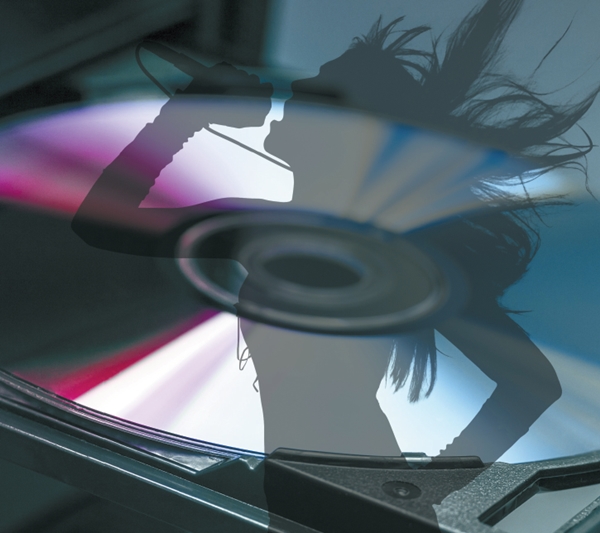 “The country’s hourly minimum wage in 2014 is 5,210 won ($5). For a singer to earn that amount, 965 people have to download their song, or if the listeners are using a streaming service, 43,416 people have to listen to the song. Is there a reason to do music anymore?”

Guitarist Shin Dae-cheol, 47, leader of the rock band Sinawi, posed this question about digital downloads to his Facebook in April, sparking a debate on social media. He was referring to the copyright royalties musicians receive from Korea’s music download or streaming providers such as Mnet or Melon.

And since most listeners no longer purchase physical CDs, Shin may have a point.

“If your child says he or she wants to become a musician, you should dissuade them,” says Shin, adding that the country’s music industry fails to fairly distribute profit to artists.

“If a song is played via a streaming service, it costs 3.6 won [based on a service providing 1,000 songs with a monthly subscription of 6,000 won], Shin said. “Have you ever seen a product that costs 3.6 won? Even a plastic bag in a convenience store costs 20 won. There’s no product in Korea that’s cheaper than digital music.”

Koreans have long been using their smartphones to enjoy music digitally. But Shin says not many listeners are aware of the paltry reward musicians receive in return for supplying their songs.

The day after Shin uploaded the Facebook post, an anonymous indie musician disclosed the income he receives from digital music services in an online community.

“One of my songs was downloaded twice and I received 35 won,” the musician wrote. “I’ve earned 662 won through streaming services.”

The post criticized the digital music distribution structure in Korea. “I doubt there will be any songwriters or musicians left in this country with such a system,” the musician said.

A step in the wrong direction

The early-to-mid 1990s was the last heyday for the country’s music market. Musicians like Seo Taiji, Kim Gun-mo and Shin Seung-hun sold more than one million records each. But this was soon followed by the digital area. The country’s music market was suddenly under reorganization. Traditional methods of listening to music using cassette tapes, LPs and CDs soon disappeared. Almost instantly, it was time for computers and MP3 players.

Of course, the trend was not just a problem here. Peer-to-peer (P2P) methods of digital file sharing triggered the birth of illegal download sites like Napster. In Korea, the similar P2P software company Soribada was created, which pioneered illegal music sharing in the country.

But smartphones have become the new platform for digital music. Many consumers insert digital music into their smartphones via streaming services by providers like Mnet and Melon, which offer full-length music content over the Internet. In Korea, streaming makes up more than 90 percent of the legal music market.

And as smartphones became the main platform for digital listening, mobile carriers became powerful in the music industry. The government’s policy of taking the telecommunication and mobile phone industry as models for economic development also played a part in giving power to these carriers.

Melon, Korea’s leading digital music service with a 65 percent market share, is operated by Loen Entertainment, a subsidiary of the nation’s No. 1 mobile carrier, SK Telecom. Melon took advantage of Korea’s high-speed Internet and developed a paid listening service at a time when the majority of music lovers downloaded songs illegally. It allowed listeners to legally access unlimited tracks by subscribing to a streaming service monthly for around 6,000 won.

In order to appeal to consumers who were used to free downloads, the subscription had to be cheap.

In May, in an attempt to alleviate the controversy over the low income musicians make through online royalties, the Ministry of Culture, Sports and Tourism forced digital music providers to abolish unlimited streaming services.

But despite the intervention, “creators” - composers, lyricists, singers and band members - still complain about the unrealistically meagre payments received through royalties.

The United States and Europe, which experienced a rough time dealing with Napster in the early 2000s, took a different route to solve the problem.

Famous heavy metal band Metallica sued Napster for copyright infringement at the U.S. District Court in 2000. Public uproar at a billionaire rock band filing a lawsuit against a small software business soon followed. But despite the criticism, the lawsuit ultimately boosted the value of creative work in the online era.

No say in pricing decisions

Shin, the guitarist who raised the issue about the rights of creators, has been pushing ahead to establish a “Correct Digital Music Distribution Cooperative” since April, pushing for producers to be allowed to participate in setting the pricing for the country’s music market.

Although the government’s recent intervention helped creators and production companies receive 60 percent of the profits, it was a mere 40 percent not too long ago. And critics say the sum taken by distributors is still too excessive.

Shin says he’s trying to develop an alternative digital music service in a cooperative style, akin to the Associated Press. He says this alternative resource will take a small amount in commission for distribution and will give the rest back to the creators.

“What kind of distributor in the world leaves a distribution margin of 40 percent and sells a product?” complains Shin. “Although it’s a little more expensive and makes less profit, if we show that this service is also favorable for consumers, I believe we can prove how much distributors take advantage of profits.”

Shin says he’s already made an establishment report. If he registers and incorporates it, he says he can begin recruiting union members.

“I don’t expect to see great results instantly,” said Shin. “If the website gains attention through word of mouth because you can use it to listen to good music for a reasonable price, I believe at least 10 percent of consumers using digital music services will switch. I think there’s hope.”

Under current regulation for dividing copyright royalties, the distributor takes 40 percent while the production company, or the record label, takes 44 percent. The rest, 16 percent, is divided between the music’s creators. In this group, composers and lyricists take 5 percent each while a singer - or singers - take 3 percent.

To put it simply, if a consumer downloads a song for 600 won, the production company and distributor shares 504 won while the songwriters share 60 won and the singer or band shares 36 won. As the majority of digital music is consumed via streaming in Korea, the situation is worse.

Let’s say a consumer pays 3,000 won a month to listen to 100 songs via a streaming service. For one song, the songwriters share 3 won, while the singer and the band share 1.8 won. As a boy band or a girl group is also regarded as “a singer,” it means they have to split 0.9 won.

To illustrate, if a consumer uses a streaming service to listen to a song by Girls’ Generation, the nine girls would have to split 0.9 won between them, taking 0.1 won each.

Although it looks like distributors are sharing profits one-to-one with producers and creators, musicians say this is simply not true. When a consumer listens to 100 songs a month, a distributor is in fact sharing the revenue with 100 other producers.

Kim went on to point out the need for “a new policy that can balance the whole music industry rather than the current contract system designed to suit an individual.” 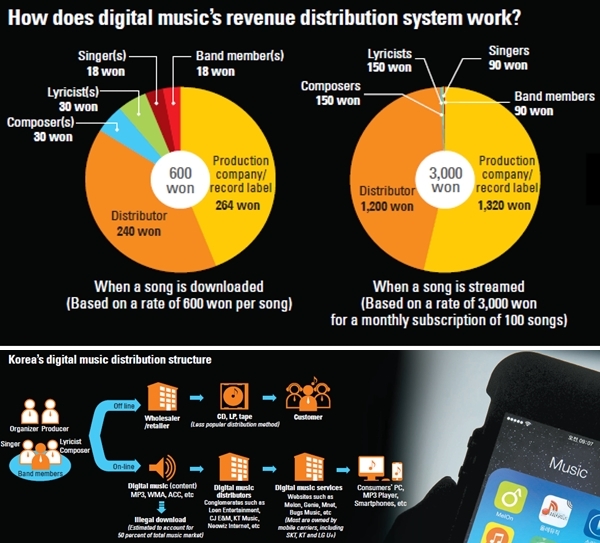 Producing an album costs time, effort and money. Musicians hesitate to invest large sums in production as physical CDs sell poorly, while profit from digital distribution is too low.

“We suffered a 450 million won loss,” said Lee, adding that his team started off with a strong will that “turned into resignation. We began to think, ‘can we ever defeat this?’ Producing an album has become equivalent to making a bad move in a chess game.”

Within music circles, insiders say if the situation remains unchanged, people will no longer be able to engage in creative work, and distributors will have no product to sell and will end up failing financially.

Lee Won-jae, director of Cultural Alliance’s Cultural Policy Center, insisted that there is a need for a sustainable industry in order to make a profit in this market economy.

“Consumers should have the willingness to pay a fair price for the quality music they consume, and the government should research a long-term policy that can establish a fair market,” said Lee.

Regarding the issue of sharing revenue, the distribution companies and the Culture Ministry seem to be busy shifting responsibility.

“Concerning the regulation of royalties, the Culture Ministry only approves the consent agreed to by the parties concerned,” an official at the ministry’s Copyright Industry Division said. “As a government, we have to consider all parties concerned, including the producers and creators, the consumers and the distributors.”

“The power [to make] pricing decisions is not with us but with the Culture Ministry,” insisted an official from Melon’s Loen Entertainment. “Although people say leaving 40 percent in distribution margin is excessive, there’s not much left when we consider high marketing fees and commission for payment charges.”

The New Politics Alliance for Democracy Party representative Choi Min-hee, who brought the issue of the current digital music distribution system to the fore, said, “Together with a movement among consumers showing willingness to pay a fair price for creative work, the government should intervene from a cultural angle, rather than looking at it from an economical angle.”

She continued, “If we can’t fix this market that got off the wrong foot from the beginning overnight, we could look into adopting other methods such as cloud funding or creative vouchers to at least financially support creators as a short-term goal.”