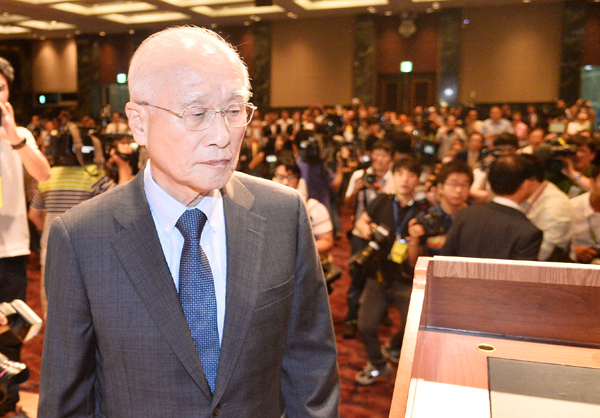 The now-defunct Daewoo Group came back in the spotlight again after its founder and former chairman Kim Woo-choong recounted in his latest book the rise and fall of a corporate empire that used to be the country’s second largest. Regardless of his personal score-settling in “Conversation with Kim Woo-choong: The World is Wide and There Are Still Many Things to Do,” the book raises interesting questions about the Daewoo demise.

The bottom line is a philosophy about the way the country coped and recovered from the Asian financial crisis that started in 1997. Former President Kim Dae-jung, who ascended to the presidency soon after the country sought an international bailout, invited Daewoo Group Chairman Kim to his side as an adviser at a time of economic emergency. The dissident-turned-president wasn’t sure if the stringent restructuring prescriptions from the International Monetary Fund (IMF) were good for the economy.

Unlike his two conservative rivals, presidential candidate Kim questioned the IMF terms for a multibillion-dollar bailout package during his campaign, claiming damage to the country’s sovereignty. He pledged to seek a renegotiation if elected. His challenge brought IMF head Michel Camdessus to Seoul to make the three presidential candidates sign a pledge to obey the terms the international lender had signed with the President Kim Young-sam government. Kim was elected and bound to his pledge.

But he nevertheless maintained doubts. He believed Daewoo Chairman Kim was in the best position to argue the opposing side. Kim had been the head of the Federation of Korean Industries, the mighty interest group of the chaebol, and was the best to know the ramifications of the IMF prescriptions.

Daewoo’s Kim defined the IMF program as “foreign interference.” In a public lecture in May 1998, he said, “Under the IMF program, international lenders seem to be doing a favor for Korea, but in reality, they are taking control of us … If our economy remains under outside control for long, there will be little left.”

Kim disagreed with the passive economic bureaucrats and claimed South Korea must remain aggressive on the external front. He forecast that the country would be able to fully pay off international loans and graduate from the IMF program within two years if it maintained an annual trade surplus of around $50 billion. One book reviewer likened Kim to Admiral Yi Sun-sin who fought a lone war with the mighty Japanese naval fleet during the Joseon era as leaders and common folk believed he was foolish to stand against cruel Japanese invaders.

Kim, too, was alone. The government, media, scholars and international society all blamed Korea Inc. for having spent beyond its capacity and bringing financial catastrophe upon its countrymen. It had to pay the price through extremely stringent restructuring. Companies were forced to bring down their debt-to-equity ratios to 200 percent, even if it meant selling lucrative assets at cheap prices. Companies had to pay their dues by selling valuable assets as a kind of atonement to people who donated their gold rings and other personal valuables to help the country. Any company doing business outside and profiting from exports was considered a Judas to the country. Chairman Kim was labeled as foolish and President Kim was advised to keep his distance from the tycoon. The Daewoo Group was dismantled and Kim was forced to stay abroad for years.

Korea became a prized pupil of the IMF school, graduating and turning around after faithfully following its instructions. But a closer look is instructive. In 1998, Korea recorded a trade surplus of $41.6 billion and Daewoo accounted for a third of it, or $14.3 billion. Foreign direct investment in Korea was $8.9 billion, although the actual inflow was only $5.4 billion - just a third of what Daewoo earned from overseas that year. Daewoo’s maverick exports had served the country better than foreign capital during hard economic times. Kim helped the country survive the painful financial crisis and then was discarded, recalled Jwa Sung-hee, former president of the Korean Economic Research Institute.

The Wall Street-triggered global financial crisis in 2008 highlighted the paradox of international financial governance. The United States and other advanced economies shunned the IMF’s way when they were in crisis. In fact, they went the opposite way, bringing down interest rates to near zero and pumping out unlimited liquidity. While allowing no exceptions to the tough medicine in the case of Korea Inc., Washington injected astronomical amounts of public funds to bail out General Motors, Citibank and AIG without even replacing their executives. The United States’ double standards were obvious and outrageous.

But that’s business. Big lenders profited by enforcing the IMF package on their trading partners - and also by avoiding it when they were in a debt crisis. Decades ago, the Korean bureaucrats did not realize that their losses would translate into others’ unwarranted rewards.

The ills of the IMF’s prescriptions are long lasting. Korea’s corporate debt levels have fallen below that in the United States, but household debt has swelled. Debt just migrated from the corporate account to the household one. Domestic demand remains stagnant. Following mass-scale layoffs, the country now has one of the largest shares of part-time workers in its workforce. Wealth polarization has also worsened to an alarming level. More than a decade has passed since Korea recovered from the so-called IMF crisis. We must re-examine the period and draw lessons to rewrite our economic future.

*The author is an economics professor at the National University of Singapore.