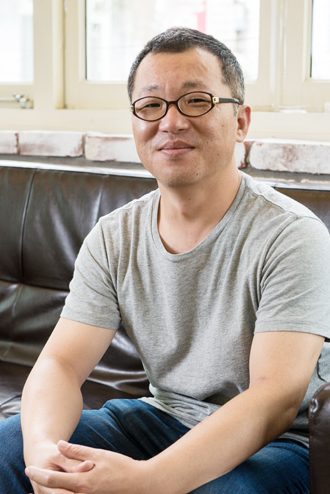 Cheon Seong-il, the scriptwriter behind the current blockbuster “The Pirates” (2014), says he gets inspired by psychology books, entertainment shows and blogs that reveal the daily lives of ordinary people. By Kim Jin-sol

After the success of the dramas “Chuno” (2010) and “7th Grade Civil Servant” (2013), an ambitious idea came to scriptwriter Cheon Seong-il.

The 43-year-old decided to write a family movie about pirates, which in large part depended on exaggerated computer graphics.

And in cinematic terminology, that meant money - lots and lots of it.

“The first thing they [the film producers] asked me was, ‘So how are you possibly going to make this work?’” Cheon, the man behind “The Pirates” (2014), said during a telephone interview with the JoongAng Ilbo last Thursday.

“I think it’s the first time I have written a scenario without thinking about the cost to actually produce it,” he continued.

Cheon’s latest creation - with a plot that circles around pirates, bandits and royal forces fighting each other with sophisticated swordplay to win ownership of a missing state seal - has garnered more than eight million views, and seems far from losing momentum.

The following is an edited excerpt of the interview with Cheon.

Q. What do you think was the driving force behind the movie’s success?

I trusted director Lee Seok-hun’s sense of humor, and I think it came out well in the movie. There were many scenes in the film that came to life better on screen than they had in my script.

What is your favorite scene?

The part where the mother whale dies. I told the director and computer graphic engineers that I wanted the mother’s eyes to look grieved, and I admit it was quite an absurd request to make.

Although the whale didn’t physically exist when we were making the film, I felt close to the animal, and when she died, it occurred to me that a long journey had finally come to an end.

What’s your next film, “The Western Front” (working title), about?

It will look into the lives of people from the 1950-53 Korean War who walk a fine line between life and death. This movie was actually the first time I ever dreamed of working simultaneously as director and scriptwriter.

Some critics are already comparing my production to “Welcome to Dongmakgol” [2005] [because the story backgrounds are similar], but I consider it my natural fate as a scriptwriter [for people to draw comparisons among works]. When “The Pirates” was released, critics compared it with the “Pirates of the Caribbean” series.