BOK chief is focused on growth

BOK chief is focused on growth 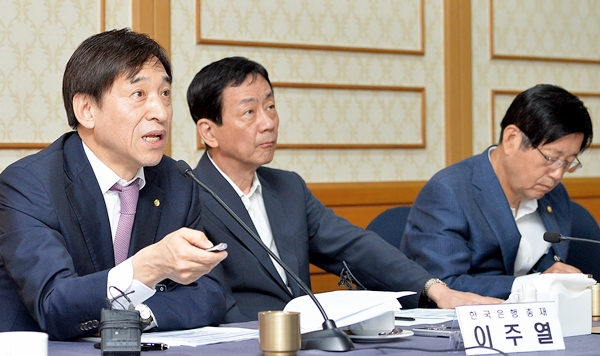 Bank of Korea Governor Lee Ju-yeol, left, speaks during a conference with lawmakers yesterday at the National Assembly. [NEWS1]

The Bank of Korea (BOK) has been trying to keep consumer prices stable, but Governor Lee Ju-yeol said yesterday it had “an incorrect projection” on consumer price increases and “neglected some structural factors.”

The governor said the bank would now focus on economic growth rather than stabilizing consumer prices.

During a morning meeting with lawmakers yesterday at the National Assembly, Lee said, “I thought it would be right to keep the forecast of consumer price increases at 2.5 percent to 3.5 percent like two years ago.”

“But I neglected some structural factors,” he added, referring to the sluggish economy and aging population.

Lee did not mention, however, when he might revise downward the BOK’s inflation rate target for the year, which it set at 1.9 percent in July.

The central bank’s goal is to stabilize consumer prices, but it has consistently released inaccurate forecasts for the inflation rate, which has stayed in the 1 percent range for almost two years.

To boost the economy, Lee stressed the need for financial institutions such as the Ministry of Strategy and Finance, the Financial Services Commission and the Financial Supervisory Service to come up with a joint plan to normalize the industry.

When asked about the effect of the weakening yen on the country’s exports, Lee said that the currency’s continuing depreciation might hurt Korean companies if Japanese exporters set more competitive prices.

Korean and Japanese companies compete in key export markets with products ranging from cars to electronics. The recent rise in the won’s value against the yen has been blamed for Korean exporters’ poor earnings.

Lee said the won faces a conflicting set of external factors, including a possible rise in U.S. interest rates over the coming months and monetary easing from European and Japanese policy makers.