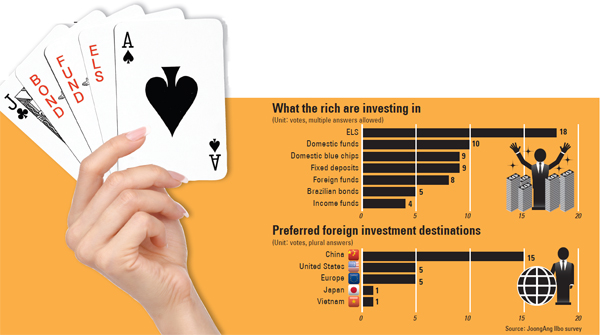 A 49-year-old surnamed Kim, who has been a CEO of an IT company, invested 1 billion won ($965 million) in a mobile start-up.

The start-up was a smartphone application developer, which planned to expand its business to the United States. Kim had never been interested in start-ups. However, when the key interest rate fell to 2.25 percent recently, he rushed to build his retirement fund by moving money out of his bank account.

Eventually, Kim bought a stake in the start-up with time deposits that reached maturity.

“I’m making a lot of money as the mobile games and start-ups are listed on the stock market these days,” said Kim. “I expect that if I only choose companies with high growth potential, I will be able to generate several times more revenue than deposits.”

Another businessman surnamed Yoo, 68, got 5 billion won by selling a business he had operated for nearly 30 years.

Nevertheless, he was worried, as there was no place to invest the money. The bank’s interest rate, about 2 percent, was too low to put the money in fixed deposits.

Yet Yoo worried about losing some of his money if he poured it into investments.

After thinking for days, he distributed the money into tax-saving investment products. He put 3 billion won down in an annuity-type product that will give him a tax-free monthly income after 10 years.

For the rest, Yoo put 1.5 billion won in national housing bonds and 500 million won in IPO funds so he could enjoy both liquidity as well as the tax-free benefits.

“As my investment income already exceeded the base for taxation, 20 million won, I have a lot of trouble every time I make an investment,” said Yoo. “I am satisfied now that I could reduce the amount of tax even by a little and increase the expected earnings.”

These huge-asset holders are at a loss for profitable investment during these low-interest times.

According to Woori Investment and Securities, the amount of floating funds is at its highest-ever level of 728 trillion won. Floating funds include fixed deposits, money market funds and cash.

According to a survey by the JoongAng Ilbo of 20 executives of major banks, securities firms and insurance companies, 15 have seen changes in their clients’ portfolios.

“As the key interest rate has been lowered recently, people tend to think of fixed deposits as a way to hold cash,” said Kim Byung-joo, head of the private banking team at Hana Bank.

“Many customers find it difficult to decide whether they should put the money back into fixed deposits or investment products when the deposits mature.”

“Since the interest rate is so low, many customers reduce the amount of deposits and increase investments,” said Kim In-eung, manager at Woori Bank in Apgujeong-dong, Gangnam District, southern Seoul. “Even a customer who has made 5 billion won with deposits and bonds over 10 years has put some of those deposits in stock funds.”

“Large-asset holders stand to lose a lot of money on risky investments,” said Kim. “Thus, they have a high interest in profit products that are relatively low risk and low return, but still generate two or three times more profit than fixed deposits.”

A medium-risk, medium-profit product that often appears in portfolios of the wealthy is equity-linked securities (ELS).

Of those surveyed, 18 private bankers said ELS is included in their clients’ portfolios. On the other hand, only nine bankers said their customers tied their money to deposits.

ELS provides return on investment as promised if the underlying asset, the stock or the index, stays within a specified certain range until it matures.

“Wealthy people prefer safer ELS index products over ELS stock products, even if profits are lower,” said Choi Chul-sik, director at Mirae Asset Investment. “They make investments after thoroughly checking on the monthly payment conditions and the early repayment probability in order to reduce the burden of taxation on income.”

Thy also eye distribution of assets by investing overseas. Until now, considering the investment risks, the wealthy did not invest more than 10 percent of their total assets overseas.

Meanwhile, the 20 private bankers gave 15 votes to China as the most promising for investment, followed by United States and Europe with five votes each.