SMEs say they expect a lot from Australia FTA

SMEs say they expect a lot from Australia FTA 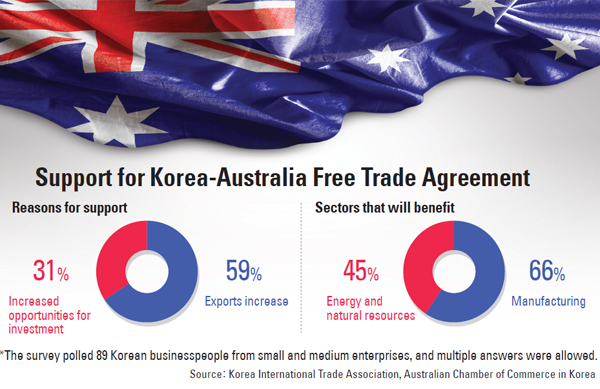 In a survey of Korean businessmen from small and medium enterprises, 80 percent of respondents said that Korea-Australia Free Trade Agreement (KAFTA), once implemented, will help boost exports.

The survey was conducted by Korea International Trade Association (KITA) and Australian Chamber of Commerce in Korea. It polled 89 business people from small and medium enterprises.

The trade pact was signed on April 8 but awaits ratification in both parliaments.

As for the impact on the Korean economy, 77% of the respondents said KAFTA will be helpful for the Korean economy overall. Sixty-seven percent of the business people said that their companies could benefit from the accord.

In the survey that permitted multiple answers, the respondents cited a wide range of benefits including a boost in exports through price competitiveness (59%) and increased opportunities for investment (31%).

Graham Dodds, Chairman of the Australian Chamber of Commerce, expressed his high expectations.

“Thus, once KAFTA goes into force, it will expand trade for both countries in a mutually beneficial way.”

He also pledged to cooperate with the Australian government to expedite the ratification.

“AustCham will help contribute to achieving speedy ratification and implementation of KAFTA to address high expectations that the importers and exporters as well as other small and medium enterprises have toward KAFTA, as demonstrated by the survey results,” he said.

The trade organization said that Australia will be removing tariffs on most Korean goods -- 99.5% by product and 100% by value -- within 5 years.

The Korean government predicts that within 10 years of its implementation, KAFTA will increase each country’s GDP by $ 20 billion.