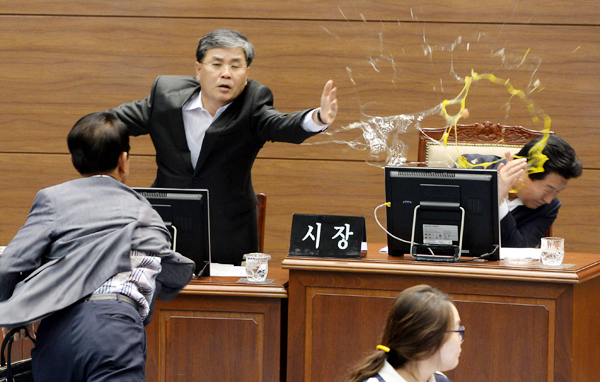 Changwon City Councilman Kim Sung-il throws an egg at Mayor Ahn Sang-soo during the city assembly’s opening session on Tuesday in protest over the relocation of the construction site for a major baseball stadium. Provided by Kyungnam Shinmun

The Changwon City Government filed a complaint against a city councilman yesterday for insulting and assaulting its mayor by throwing two eggs at him during the city council’s opening session on Tuesday.

Aside from filing the complaint, the city officials will also demand Kim resign for his actions inside the city assembly, which the city government said was an act in total disregard of Changwon citizens as well as an “act of terror.”

“Throwing an egg at a mayor who represents 1.1 million residents during a public occasion is an act that dishonors the people of Changwon,” the municipal government said in a statement released just hours after the incident.

The incident unfolded on Tuesday afternoon inside the main conference hall of the Changwon City Assembly. During an opening session, Councilman Kim Sung-il, who represents Jinhae District, abruptly stepped forward, calling out, “Masan Mayor Ahn Sang-soo, why are you sitting at the chair for [Changwon’s] integrated city mayor?”

He then proceeded to throw two eggs at him. One hit Ahn’s right shoulder, splashing yolk all over his body, while the other hit the wall behind him.

Kim was apparently disgruntled over Ahn’s decision to relocate the construction site for the NC Dinos’ baseball stadium from its originally planned location in Kim’s Jinhae District to another area in what was formerly Masan. In 2010, the cities of Masan and Jinhae were integrated and became part of Changwon in South Gyeongsang.

A grim-faced Ahn was escorted out of the assembly hall immediately after the incident. The session was postponed for 30 minutes and resumed afterward.

The fact that the accused city councilman is a fellow ruling Saenuri Party member made the incident even more surprising. Ahn himself was the party’s former chairman under the previous Lee Myung-bak administration and is still a party member. He was elected mayor in the June 4 polls.

Ahn’s decision to change the site for the stadium has drawn intense backlash from Jinhae residents, who hoped that the venue would spur the local economy and bring an influx of visitors. Baseball is the country’s most popular professional league sport.