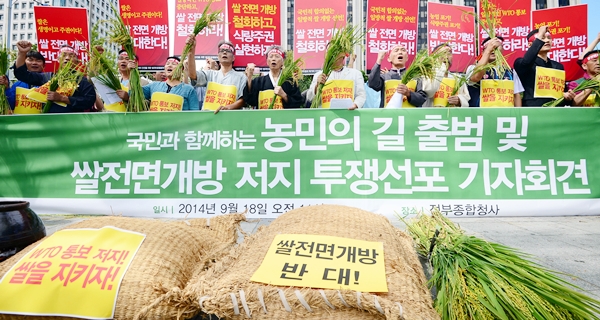 Farmers and members of an agricultural interest group stage a protest yesterday in front of the Central Government Complex in Jongno District, central Seoul, to oppose the government’s plan to open the long-protected rice market. [NEWSIS]

Farmers upset over impending imports of foreign rice burst into a policy coordination meeting yesterday morning at the National Assembly and threw eggs and chili powder at bureaucrats and ruling Saenuri Party figures.

Lawmakers were discussing how to open the long-protected market and the steep tariff that will be put on imported rice starting next year. The breakfast meeting was attended by Saenuri Party Chairman Kim Moo-sung and Agriculture Minister Lee Dong-phil.

The farmers belonged to a national association of farmers that fears any tariff on imported rice will be whittled away over time.

Raw eggs and chili powder were all over the room, and Rep. Rhee In-je of the Saenuri was hit in the arm by an egg. Taken aback by the sudden violence, Kim Moo-sung demanded the farmers apologize for the assault and request their own meeting with policy makers.

“We will be forced to the brink of disaster,” one protester shouted as he was dragged away by an Assembly guard.

The farmers’ protest yesterday came just hours before the government officially announced its decision to allow imports of foreign rice with a 513 percent tariff, a figure the government contends will do more than enough to protect the country’s domestic rice producers.

“It is very regrettable [what happened at the policy meeting],” said Lee, the agricultural minister, during a press briefing a few hours after the incident yesterday at the Sejong Government Complex, where he announced the market liberalization plan. “I feel immense responsibility as the agricultural minister after having watched the farmers’ protest during a busy harvest season.” 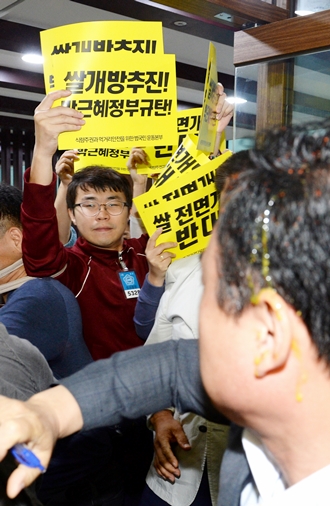 Lee, however, stressed that the economic damage the country would face would be tremendous if it stays shut to the international rice market.
“I believe the general public and the farmers all agree with that.”
According to the ministry, American rice sells for around 37 percent of the Korean domestic price, so a 513 percent tariff should protect local rice producers.
It remains to be seen, however, whether the authorities can go ahead with the tariff as the government has to negotiate with the World Trade Organization (WTO) to get it approved.

“It will be an arduous and difficult journey to have the rate approved by the WTO,” said the minister.

But Lee said the government set the 513 percent rate according to the guidelines provided by the international organization.

The farmers’ association yesterday demanded in a statement a special law that will guarantee the 513 percent tariff will stay untouched under any circumstances. It also criticized the government for not being sincere in its commitment to preserve the tariff.

“The central point of the rice tariff rate is to maintain it at the same level,” the statement said. “[But the government’s announcement] fell far short of assuring the people.”