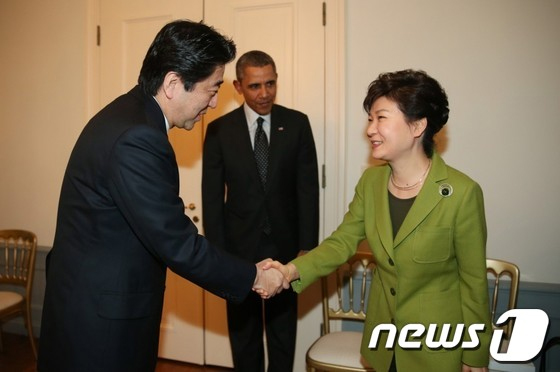 Japanese Prime Minister Shinzo Abe yesterday conveyed to President Park Geun-hye through a handwritten letter that he hopes to meet her at upcoming international conferences in the fall and hold talks to improve strained bilateral ties.

Former Prime Minister Yoshiro Mori delivered the handwritten letter from the incumbent prime minister in a rare meeting with President Park at the Blue House yesterday. The letter called for “talks because there is the task of improving Korea-Japanese relations so that next year can be a good year for both countries.”

Next year marks the 50th anniversary of the normalization of ties.

“I look forward to meeting with you during international conferences to be held this fall,” Abe added.

The letter addressed to Park appears to be a bid by the Japanese prime minister to ease relations with Seoul and push for a bilateral summit on the sidelines of the Asia-Pacific Economic Cooperation (APEC) leaders’ summit in Beijing or a G-20 summit in Australia, both scheduled in November.

The two leaders have yet to hold bilateral talks, though they met during a trilateral summit in March that included U.S. President Barack Obama at The Hague.

The letter appears to convey Abe’s hopes of improving bilateral ties so that a bilateral summit may possibly be held.

Park conveyed to Mori that she looked forward to “a future-looking relationship between Korea and Japan marking the 50th anniversary of the normalization of ties for next year.”

But for this to happen, she added, past historical issues must be resolved, including the issue of the Japanese military’s sexual enslavement of Korean women and girls during World War II. Those survivors, now in their 80s and 90s, are commonly known as “comfort women.”

Mori visited Korea to attend the opening ceremony of the 2014 Incheon Asian Games as the head of the organizing committee for the 2020 Olympics and Paralympics in Tokyo.

Mori met with reporters after his meeting with Park, noting that he also expressed to the president Abe’s thoughts that her Aug. 15 Liberation Day message about starting a new chapter of Korea-Japan relations “came close to heart.”

Upon receiving the letter, Park sent her regards to the Japanese prime minister, he added, agreeing that efforts are needed on both sides to improve relations.

On the same day, the fifth round of Korea-Japan talks in Tokyo to resolve the comfort women issue brought about anticipation that there could be some headway into tackling the tensions between the two nations around historical and territorial disputes.

During the meeting with Mori, President Park welcomed his visit to Korea and attendance at the opening ceremony of the Incheon Asian Games. “I meet you today after meeting you at my inauguration [as president] last year,” she said.

Park recalled meeting Mori in 2006 during a visit to Japan, when she served as a lawmaker, and thanked him for his role in bilateral relations as head of the Japan-Korea Parliamentarians’ Union.

“In the past you have put a lot of effort into advancing Korea-Japan relations, and even after you retired as a politician, you have continued to play various roles, and I thank you for this,” she said.

Park also told him she hoped to “pave relations both nations could be happy about.”

The president last met with a prominent Japanese figure in late July, when Tokyo Gov. Yoichi Masuzoe came to Korea.

The meeting yesterday comes ahead of her seven-day trip to North America for a state visit to Canada, followed by her attendance at the 69th session of the UN General Assembly and the UN Climate Change Summit on Sept. 23 in New York.