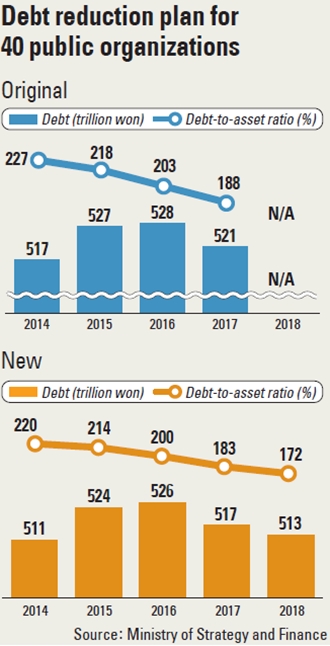 To accelerate debt reduction at public corporations, the government yesterday unveiled a revised version of its debt management plan with the goal of lowering the debt to 513 trillion won ($491 billion) and the debt-to-asset ratio to 172 percent by 2018.

According to the Ministry of Strategy and Finance, the initial plan for the 40 public companies made earlier this year was set to be completed by 2017 with debt reduced to 521 trillion won and a debt-to-asset ratio of 188 percent. The new debt management plan extends the time frame by a year.

The ministry projected that the recent appreciation of the Korean won, tighter management of the companies’ budgets and reduction in overseas investments will cut back debts by 11.8 trillion won between next year and 2018.

This figure, however, does not include the 10.5 trillion won that Korea Electric Power Corp. (Kepco) will receive from selling its property in Gangnam to Hyundai Motor.

The finance ministry said that of the 11.8 trillion won saved, about 5.4 trillion won will be spent on government projects targeted at boosting the economy, funding clean energy research and infrastructure construction.

However, the ministry said it expected the debts of the public companies to increase from 511 trillion won this year to 524 trillion won next year and 526 trillion by 2016 before it starts to fall.

But it stressed that although the size of the debt will increase, the debt-to-asset ratio will improve from 220 percent to 214 percent next year. The ministry said that the increase will be partially due to necessary spending on research and development in areas such as energy and safety.

Overall debt will increase partially because the government is starting a carbon credit trading system and raising taxes on burning coal in January. This is expected to burden an additional 2.4 trillion won on the public companies. Kepco is expected to be among the companies hit hardest by the changes.

The finance ministry said that to keep a lid on debt, it will start capping corporate bond issuance next year. The system will prevent each public company from selling bonds that pass a limit set for each.

Out of the 40 debt-ridden state-run organizations, this regulation will be tested starting next month on the 16 with the most debt, such as Korea Land and Housing Corporation (LH), Korea Gas Corporation (Kogas) and Korea Expressway Corporation.

Excessive issuing of corporate bonds is the main reason the companies have high debts. Of the 16 most indebted companies, 62 percent of the debt is from over-issuing bonds. By capping issuing, the government hopes to reduce that portion to at 58 percent by 2018.

LH will be allowed to issue bonds worth up to 68.1 trillion won next year, the highest cap, followed by Kogas with 25.7 trillion won and Korea Nuclear and Hydro Power Corporation (KNHP) 11.4 trillion won.

The Finance Ministry will monitor the amount of corporate bonds each quarter and if a company surpasses its cap, the ministry will tighten the bond issuing cap the next year.

The Finance Ministry also said it will investigate new projects worth more than 50 billion won and will conduct an in-depth evaluation of completed projects.

The ministry has also promised to fire any CEOs who fail to meet the debt reduction goals.

The ministry will have a mid-term debt reduction performance evaluation at the end of this month and another will be held early next year.

The reduction in public debt is part of the Park Geun-hye administration’s campaign started last year to increase the government’s fiscal soundness by reducing overlapping spending.