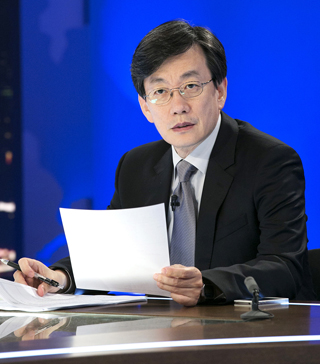 
Just a year after revered journalist Sohn Suk-hee, 58, began to anchor the evening news program on cable channel JTBC, the broadcaster has decided to revamp the show on an unprecedented scale, announcing earlier this year that it would produce the country’s first 100-minute main evening news program.

“While running a news program for merely 50 minutes during the past year, we asked ourselves whether we were genuinely fulfilling our goal to ‘take a step further’ than other news channels,” Sohn said yesterday at a press conference held at JTBC headquarters in Jung District, central Seoul. “To achieve our goal, we thought we needed more time and a different time slot.”

Sohn will anchor the program on the weekdays.

He explained during the press conference that the program will be divided into two parts, with the second segment starting at 9 p.m. following a five-minute break.

The first will recap daily events and issues like the previous “JTBC News 9,” while the second segment will “take a step further,” by focusing on in-depth news reports, interviews and debates.

On whether the reshuffle is too extreme, particularly when it comes to concerns that a news program longer than an hour may bore viewers, Sohn acknowledged that he, too, is “jittery.”

Nevertheless, he says he’s hopeful the program won’t be dull.

“We’re going to make sure we don’t repeat in the second part what we’ve mentioned before in the first part,” he emphasized.

“We thought we could pull this off because we have anchor Sohn Suk-hee on our crew,” Oh said with confidence. “The reputation he has built is what made all this possible from square one.”

Sohn, sitting beside Oh, humbly dismissed the accolade, saying he was only “one of them.”

“I’m not doing this alone,” he said. “The reporters, editors and video journalists in the newsroom all worked together as a team to create the news program we have today, and it is they who will make the program flourish further.”

When asked whether the program’s title, “JTBC Newsroom,” was inspired by the hit American political drama series, “The Newsroom,” Sohn said he had “absolutely no idea what the show is about.”

“I guess it’s understandable to assume we copied the title, but it’s really not right to compare the two,” he said. “Other broadcasters like BBC and CNN used the title for their news programs way before the television series was out.”