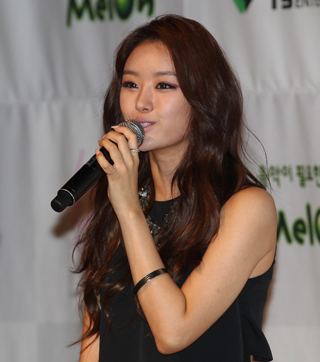 Song ji-eun, a member of K-pop girl group Secret, released a teaser yesterday for her upcoming single “Don’t Look at Me.”

The video was released at noon on Secret’s official fan club website and its agency’s official YouTube channel.

Unlike the bubbly, upbeat image Secret painted in its previous hits, Song’s upcoming single will be darker and more somber, her agency, TS Entertainment, announced yesterday in a press release.

The song centers on the kind of love and relationships that are often subject to social prejudice and stigma - homosexual or interracial relationships, for instance - the agency wrote.

It further hinted that “Don’t Look at Me” combines ballad, hip-hop and rock elements.

Song has released two independent singles apart from her role as lead vocalist in Secret. Her first single was “Crazy” (2011), followed by “False Hope” (2013).