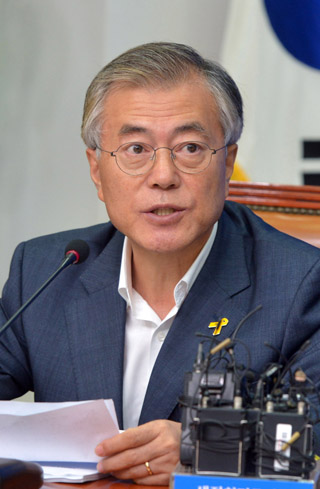 Rep. Moon Jae-in, a former opposition presidential candidate, said solving the political gridlock over the special Sewol law is one of the two most urgent issues facing the embattled New Politics Alliance for Democracy.

Speaking at the premier meeting of an emergency leadership committee, Moon said the second priority was major reforms of the party and the political establishment - and he said he would put his political career on the line to achieve them.

It was a bold promise considering the depth of the impasse over the Sewol law with the ruling Saenuri Party - and the deep divisions within the NPAD itself. Moon himself is the de facto leader of his party’s largest faction.

The impasse is over a special law to investigate the cause of the tragedy and the bungled rescue of the ship’s passengers and crew.

More than 300 people died in the Sewol.

“The Saenuri should come up with alternative terms [in the special Sewol law] if the families yield their demand that a fact-fining committee be given investigative and indictment authorities,” said Moon, a former human rights lawyer, during the NPAD’s first emergency committee meeting at the National Assembly yesterday.

While calling on the Saenuri to present alternative terms that could be trusted by the families, Moon lashed out at President Park Geun-hye for what he described as having instructed ruling party figures to stand firm in their negotiations on the Sewol law, calling Park’s instruction “a breach of the separation of powers.”

“It is an unfair interference [by the executive branch] in the legislative authority,” he said.

During a meeting with Saenuri Chairman Kim Moo-sung and Floor Leader Lee Wan-koo at the Blue House last Tuesday, the country’s first female president said the ruling party should not agree to additional negotiations on the Sewol law but stick to a second agreement it struck with the NPAD, which the NPAD later reneged on in the face of the families’ opposition.

The high-profile politician’s remarks yesterday signaled his comeback to the political center and possibly a bid for the NPAD’s leadership early next year.

In recognition of the party’s highly divided state, the emergency committee chairman, Moon Hee-sang, sternly warned against the kind of factional infighting in recent weeks that almost drove Floor Leader Park Young-sun to quit the party.

“From now on, we do not have factional strife,” said Moon, the 69-year-old interim party leader. “There is no point of fighting on a sinking ship.”

He warned he would punish lawmakers if they disturbed party discipline and unity.

On Sunday, the NPAD formed a six-member emergency committee that will set the course for the party until it holds a general convention early next year to elect a party chairman and supreme council members.

While Committee Chairman Moon and Floor Leader Park are two of its six members, the other four largely represent each main faction in the NPAD, which has 130 lawmakers in the National Assembly.

Moon Jae-in is unofficial head of the pro-Roh Moo-hyun faction comprised of about 30 lawmakers who served in the Roh government. Moon recently displayed his political capability by winning support and trust from the grieving Sewol relatives by joining in a hunger strike for nine days - an act that also drew criticism that it deepened the gridlock rather than resolved it.

Of the six committee members, much attention is expected to fall on Moon Jae-in for his political influence and the possibility that he could run again for president in 2017.

Veteran lawmaker Park Jie-won leads a faction of about 10 lawmakers elected from the Jeolla regions. Having been elected twice as a floor leader of the opposition and served as the presidential chief of staff for Kim Dae-jung, Park is a seasoned politician who is expected to aim for the party chairmanship next year.

Rep. In Je-Keun represents a faction that follows the political principles of late democracy activist-turned-politician Kim Geun-tae. Rep. In is Kim’s widow and is revered in the liberal bloc for her pro-democracy struggle in the 1980s with her late husband. The late Kim and In were both awarded the Robert F. Kennedy Human Rights Award in 1987. That faction has around 17 lawmakers.

Another committee member, Chung Sye-kyun, is from a faction that is considered close to the pro-Roh faction, though it is not explicitly supportive of the hawkish stance often displayed by Roh loyalists. That faction has around 15 members.

Floor Leader Park has no faction under her command, a fact that partly explains the relentless attacks from fellow party members in recent weeks, particularly over her controversial appointment of a former Saenuri member to co-lead the party.

The former TV journalist adapted a surprisingly moderate stance in dealing with the ruling party on the special Sewol law and then tapped Lee Sang-don, professor emeritus at Chung-Ang University, to co-lead an emergency committee to run the NPAD. Lee was one of the key policy architects of the Saenuri Party’s 2012 presidential campaign.

Appalled by Lee’s appointment, lawmakers mainly from the pro-Roh and Kim Geun-tae factions demanded Park rescind her appointment and also resign from the leadership. Shocked by what she described as “how ideologically rigid the party had become,” Park seriously considered leaving the party, which would have been unprecedented. Instead, she stayed on as floor leader but relinquished her running of the NPAD.

But the internecine squabbling continued yesterday.

Rep. Cho Kyuong-tae, who belongs to another NPAD faction, harshly criticized the emergency committee for doling out committee positions to lawmakers calculating ways to win in a general convention next year.

“The committee falls far short of innovative and reformist thinking and a neutral stance and fresh ideas,” Cho said at the National Assembly yesterday. “It is just a group of lawmakers representing each faction [within the NPAD]. … Our party is now hijacked by the hawkish, pro-Roh faction and is sinking just like the Sewol ferry.”