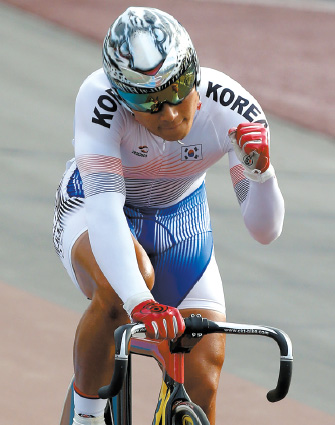 Cho Ho-sung races in the omnium final yesterday at the Incheon International Velodrome. By Kim Seong-ryong

INCHEON - Competitive cycling isn’t very popular in Korea, but veteran Cho Ho-sung has been at the forefront of the sport in his country. And his finale was one to remember.

In the 1994 Hiroshima Asian Games 40-kilometer points race, which is 160 laps of a 250-meter track and is scored every 10 laps, Cho won his first Asian Games gold medal. He later became the first Korean to stand on a podium at the world championships by winning a bronze in Germany.

Cycling insiders say Cho proved that an Asian can be competitive in a sport dominated by the Europeans. Cho aimed to be the first Korean Olympic medalist in cycling in Sydney, but he finished fourth.

In 2008, Cho left professional bicycle racing to pursue his dream of an Olympic medal, even though he was able to earn an average of 200 million won ($192,400) in prize money a year.

“There is always something worth more than money,” Cho said at the time.

The dream, however, wasn’t easy to realize because the points race, which was his best event, was excluded from the 2012 London Olympics, forcing him to compete in the omnium, which includes both short and long courses.

He started changing his body to fit the sport, focusing on endurance. He went from 85 kilograms (187 pounds) to 75 kilograms (165 pounds).

Cho was second in a world cup event prior to the London Olympics, but he finished 11th at the Games.

Cycling insiders thought the 38-year-old’s career was finally over, but he decided to compete in Incheon, against the wishes of his wife, Hwang Won-kyung. “He really wanted to retire after a good finish in a domestic competition,” she said.

“I always respected my dear friend and speed skater Lee Kyou-hyuk, who never gave up even though he didn’t win a single medal in his 24-year Winter Olympics career,” said Cho. “I wanted to close my career with good memories at Incheon, without any regrets, like Lee did.”

Cho started attending graduate school at Kyonggi University last year to study social physical education. “I want to teach young prospects to help them win an Olympic medal,” Cho said. “It is a very hard quest to complete in Korea as it isn’t a popular sport, but I want to contribute myself to improve Korean cycling.”