Recently, Samsung Electronics stocks have been sliding on the back of concerns of its disappointing performance not only for the third quarter but also expected in the fourth quarter.

Stocks at related companies, including major affiliated suppliers of the world’s largest smartphone manufacturer, have also been retreating, including Samsung SDI and Samsung Electro-Mechanics.

The recent bearish movement by the Korean tech company contrasts with its rival Apple, which has enjoyed upward momentum particularly since unveiling its larger-screen iPhone 6 and iPhone 6 Plus.

But Samsung Electronics has remained calm as market analysts further lower their outlook of the company’s operating profits for the third quarter and even speculate that the situation won’t improve until early 2015. 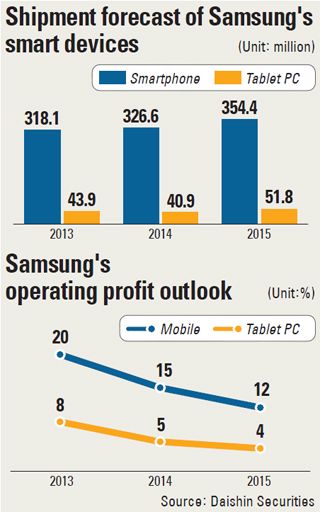 The are also speculations in the market that Samsung has been indifferent to the declining value of its stock because it would ease the financial burden on the inheritance tax that the conglomerate’s heir apparent Jay Y. Lee would have to pay.

Stock in the nation’s largest tech giant, which fell for four trading days, saw its price rise at the last minute yesterday, but the increase wasn’t significant, at half a percent. Stock value of Samsung Electronics has remained in its lowest period in two years, closing at 1.15 million won ($1,101.7) at yesterday’s market.

The stock value of the company has been retreating since hitting this year’s high at 1.47 million won in June. As a result, the market capitalization ratio of the company on the benchmark Kospi has been falling. The company’s market cap’s ratio, which was once 20 percent, has fallen to less than 14 percent.

The negative outlook has been raising investors’ concerns, since more than a year ago the company celebrated operating profit exceeding 10 trillion won, a first for a Korean company.

“The biggest cause of the significant cut on Samsung Electronics’s operating profit is the disappointing sales of its smartphones,” said John Kang, an analyst at Daishin Securities.

“This is largely because local companies in emerging markets including China are selling high performance smartphones at lower price and as a result the average selling price of Samsung’s IM [Internet mobile] business will fall 12 percent compared to the second quarter.”

However, not all is lost for the tech company, as the situation is expected to improve in the first quarter of 2015.

One factor that would contribute to the improvement is the new Galaxy Note 4 and Galaxy Note Edge.

“It is likely that the Galaxy Note Edge will be priced relatively more affordable when compared to the Galaxy 4,” Kang said. He said a high-end, affordable smartphone would allow the company to versify consumers’ preference for Android phones over Apple.

He said Samsung Electronics’s effort to expand its business to other projects and collaborate regarding its smartphone business will also boost the company’s performance next year.

“These moves are considered to be the company’s strategy to improve its smartphone business in 2015,” Kang said.

Even if Samsung’s performance recovers next year, operating profits as high as last year are unlikely.

Despite the difficult outlook that Samsung faces, the company has taken a relatively passive approach, raising speculation that the falling stock prices will be advantageous to Jay Y. Lee.

Since the second half of last year, Samsung has been ramping up preparations for succession, although it has never admitted to it. Instead, it has said that the recent reshuffling of its entire organization from mergers to brand changing is to increase the efficiency of the group by eliminating overlapping business.

The tax burden on Jay Y. Lee when he inherits Samsung Electronics is calculated to be more than 500 billion won lighter now than when the company’s stock hit this year’s high in June.

As the stock price has fallen to 1.15 million won, it is speculated that he will pay 3.6 trillion won in inheritance tax on the 3.38 percent of stock, or 4.98 million shares, that his father currently owns. In June, when Samsung’s stock value hit its annual high, the inheritance tax was estimated to be more than 4.1 trillion won.

Meanwhile, the Korea Exchange (KRX), the main operator of the Korean stock market, said Samsung SDS has passed its preliminary evaluation for an IPO.

The IPOs of Samsung SDS and the conglomerate’s de facto holding company Samsung Everland are expected to play a significant role on the succession process.

The market has guessed that the IPO will take place in November and would be the largest the country has ever seen.