Two Koreans up for Nobel Prizes

Two Koreans up for Nobel Prizes 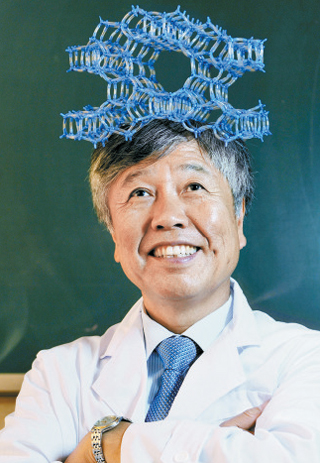 Ryoo Ryong, director of the Daejeon-based Center for Nanomaterials and Chemical Reactions, poses for a photo with a molecular model on his head. By Kim Seong-tae


For the first time, two Korean scientists are top contenders for Nobel Prizes, according to an analysis of leading researchers.

Thomson Reuters released its 2014 Nobel Prize predictions yesterday, and named Koreans as strong laureate contenders in the fields of physiology or medicine as well as chemistry.

Ryoo Ryong, 59, director of the Daejeon-based Center for Nanomaterials and Chemical Reactions at the Institute for Basic Science, was named as a contender for the Nobel Prize in the field of chemistry. He is also a chemistry professor at Kaist.

Korean-Canadian Charles Lee, 45, director at the Jackson Laboratory for Genomic Medicine and visiting professor at the Seoul National University College of Medicine, was named as a contender for physiology or medicine.

They were included on Thomson Reuters’s list of 27 researchers representing 27 academic and research organizations in nine different countries.

This is the first time that an ethnically Korean researcher has made it into the annual Thomson Reuters Nobel Prize predictions lists. Korea’s only Nobel laureate was President Kim Dae-jung, who won the Nobel Peace Prize in 2000.

Since 2002, Thomson Reuters, a media corporation headquartered in New York, has correctly predicted 35 Nobel laureates. Nine won in the year of the forecast and 16 won within two years.

The predications are based on its Intellectual Property and Science unit’s analysis of citations in the Web of Science, a top global search platform to identify influential researchers in the categories of chemistry, physics, physiology or medicine, and economics whose works are highly referred to and worthy of recognition.

Ryoo was named alongside Saudi Arabian Charles T. Kresge and American Galen D. Stucky for the design of functional mesoporous materials, which are useful as supports for catalysts, biosensors and imaging because of their large internal surface areas. They were up against two other contenders.

A graduate of Seoul National University who received a doctorate in chemistry from Stanford University, Ryoo has focused his research on mesoporous carbon, which can incorporate clusters of platinum atoms and can be used for fuel cells.

“I heard that I have been listed as a nominee for the Nobel Prize for the first time on a business trip to Europe last week,” Ryoo told the JoongAng Ilbo. “Rather than personal joy, I think the significance it will have for our society is more important.”

While neighbor Japan has produced 16 Nobel laureates in the field of science, Korea, though it ranks 10th among world economies, has yet to even produce a Nobel candidate.

“This is like receiving official recognition from the international community that Korean scientists, too, have reached the Nobel Prize level,” Ryoo said. “Whether I actually receive the prize or not, I think this will help our society escape from its ‘Nobel Prize inferiority complex.’”

Lee, alongside American Michael H. Wigler and Canadian Stephen W. Scherer, was named as a Nobel laureate contender for his contributions to the discovery of large-scale copy number variation and its association with specific diseases. He was born in Seoul and moved to Canada when he was 2 years old.

Lee, a graduate of the University of Alberta, was previously director of the Molecular Genetic Research Unit at Brigham and Women’s Hospital and an associate professor at Harvard Medical School.

The 2014 Nobel Prize in Physiology or Medicine is scheduled to be announced on Oct. 6 in Stockholm, and Chemistry on Oct. 8.