Yangjae valley a hub for research

Yangjae valley a hub for research 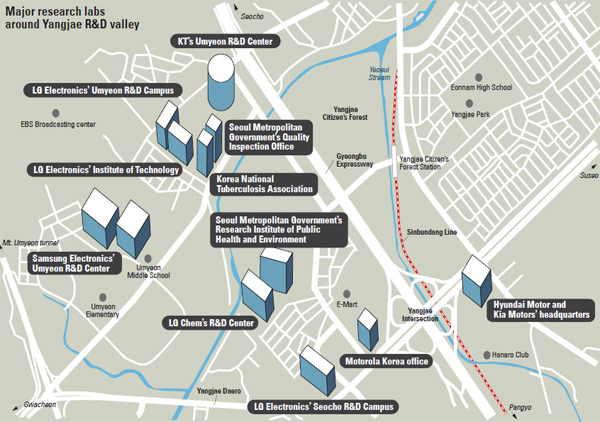 Umyeon-dong, Gangnam District, a well-known, private neighborhood for the wealthy in southern Seoul, is going through some changes.

A 10-meter-high fence is being erected and tower cranes are rising up amid luxurious mansions.

Large trucks full of construction materials are coming and going as Samsung Electronics’ research and development (R&D) center, scheduled to be completed by May, gets under way. Half of the 330,000-square-meter (81.5-acre) neighborhood is being transformed from a residential area to an R&D center for the nation’s leading tech company that will employ approximately 10,000 software and design experts.

Umyeon-dong isn’t the only neighborhood near Yangjae that’s developing. Talented engineers and researchers are moving into the area as southern Gangnam becomes a national hub for private companies’ R&D centers.

Hyundai Motor is the newest in a line of conglomerates, including LG and Samsung, that are turning the neighborhood into an R&D valley.

LG Electronics was the first leading conglomerate to choose Yangjae to set up an R&D center.

In 1975, when the country was under the leadership of President Park Chung-hee, LG opened its R&D campus on the southeast end of Mt. Umyeon on a 32,160 square-meter plot. Now, about 800 researchers work at the center.

“When our research center was first established here in the 1970s, there were nothing but green in the surrounding areas,” said an LG Electronics official. “However, today with the passing of time we are surrounded by other conglomerates’ research facilities as well as apartment and commercial buildings.”

In 2009, LG Electronics set up another R&D campus in Seocho not far from the original in Umyeon. About 3,000 researchers work at the 20-story lab and design center, on a 72,600-square-meter plot. The employees here focus on IT convergence and software development.

In December, 300 or so researchers from LG Chem will relocate from its center in Daejeon to a building next to the conglomerate’s Seocho campus that was previously occupied by the state-run research center Korea Information Society Development Institute. The state-run center moved to Jincheon, North Chungcheong, as part of the government’s project to transfer many of the government and public institutions to areas outside of greater Seoul and Incheon.

KT also opened an R&D center in the neighborhood in 1991 just to the right of LG’s Umyeon R&D campus.

The mobile carrier’s center has a research lab for studying next-generation networking including wireless Internet, and a service research section that is working on projects ranging from the Internet of Things, Internet TV and smart home to security, health care and big data.

Hyundai Motor, which won the bid for Korea Electric Power Corporation’s land in Samseong-dong, southern Seoul, last week, will open a global R&D center at its current headquarters in Yangjae. The automaker is planning of turning its Yangjae office into its main researcher, with a goal of hiring 2,000 employees in the next 10 years.

According to Seocho district government, as of last year there were 273 R&D hubs run by private companies in an area covering 14 square kilometers. About 20 are run by top Korean conglomerates.

The main reason private companies want their researchers to be based in southern Gangnam is largely because of its easy access to roads connecting the entire Peninsula and Seoul.

The Gyeongbu Expressway passes through the east side of the Yangjae R&D valley and the Yangjae intersection on the north connects to the Nambu Ringway, while the 88 Olympic Daero leads to various neighborhoods in Seoul.

The companies say the location of the R&D center also plays a huge role in helping them secure the best talent from around the world, people who will be responsible for the present and future of the business.

“Securing a research facility within Seoul has been one of the biggest priorities of the group,” said a Hyundai Motor executive. “Since we won the bid for the Kepco land, it will be easier to secure Class A global talent.”

He said the brightest minds with Ph.D.’s from prestigious overseas schools or who have worked at other automotive companies show strong resistance to working at the company’s research hub in Hwaseong, Gyeonggi.

“Every morning I have to wake up hours ahead of dawn to take the subway and shuttle bus before arriving at the R&D center, which takes an hour and a half,” said an employee at Hyundai Motor’s Namyang R&D Center who lives in Yongsan, central Seoul. “If the lab is relocated to Yangjae, my quality of life will improve greatly.”

And the Seocho district government has been promoting itself to conglomerates as the ideal place to open a research center. In 2005 after rezoning some land in Umyeon-dong, the government succeeded in attracting Samsung Electronics. In 2010, it designated the sector a special research area.

The Seoul government is also supportive of making the neighborhood one of the world’s top urban R&D zones.

“We are currently negotiating and convincing the Seoul government, the Ministry of Land, Infrastructure and Transport as well as the Ministry of Environment to ease up on regulations so we could attract more corporate R&D centers,” said Lee Won-hyung, an official at the Seocho district government. “So far we were able to increase the floor area ratio limits and the limit on building height from four stories to 10.”

The construction of Samsung Electronics’ R&D center is estimated to have created jobs or 2.1 million construction workers a year. And after the facility is completed in May, it is expected to generate annual revenue of 30 billion won.

“There are investors coming in and out as the potential for further development has grown,” said a realtor in Umyeon-dong.

But the biggest hurdle the companies face to their R&D centers in Yangjae is still tight regulations.

“There are cracks on the R&D center building as it is old and the spaces are getting smaller as there are now more researchers, but because of the tight development regulations protecting green areas, remodeling the building or expanding the facility is near impossible,” said an R&D official of a conglomerate who requested anonymity.

“We have frequently asked the local government and the central government to lift the regulations but it hasn’t been approved.”