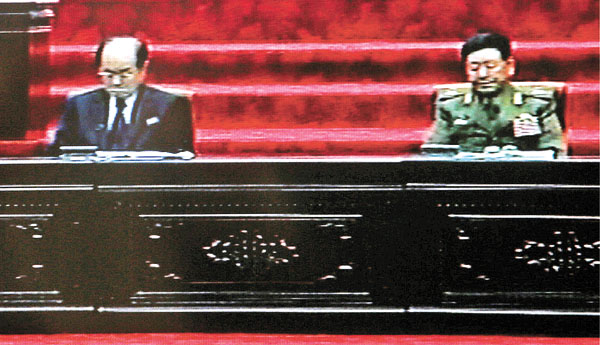 In this image captured from North’s Korea Central Television of the Supreme People’s Assembly meeting on Thursday, North Korean leader Kim Jong-un is absent from his usual seat on the leadership podium. [Korea Central TV]


North Korean leader Kim Jong-un was conspicuously absent from a legislative session of the Communist regime, fueling speculation about his health.

The Supreme People’s Assembly held a session in Pyongyang Thursday and the North’s Korea Central Television aired a report about the meeting of the rubber-stamp legislature at 8 p.m. The report showed the podium where North Korea’s powerful leaders sit, but Kim was nowhere to be seen.

“Workers and delegates of the party, cabinet and armed forces attended the session,” the network said.

Yesterday’s session was the Supreme People’s Assembly’s second meeting of this year. Kim attended the first session in April and actively participated in voting.

Speculation grew Kim might have a health issue. The North’s state media have not reported on any public activity since he attended a concert with his wife on Sept. 3.

“Before his last public appearance, TV reports showed that he was limping severely,” said a South Korean government official. “He appeared to have a problem with his joints.”

“Including a possible health issue, we are carefully watching the situation with various possibilities in mind,” said Park Soo-jin, deputy spokeswoman of the Ministry of Unification. “Because the North did not say why he was absent, there is nothing we can confirm now.”

The ministry, however, said yesterday the conspicuous absence of the North Korean leader should not be over-analyzed. A senior ministry official said Kim is still working since he sent a letter to a youth group last week.

“Believing that the regime is now stable, he could have decided that he can skip less important meetings,” the official said.

“Kim Jong-il, his late father, also attended the Supreme People’s Assembly every other time,” he said. “So we have to analyze the situation more broadly.”

The latest session of the Supreme People’s Assembly also showed that the National Defense Commission, the highest decision-making organ of the North’s military chaired by Kim, experienced some changes.

The Supreme People’s Assembly dismissed Choe Ryong-hae from the post of vice chairman of the National Defense Commission and replaced him with Hwang Pyong-so, director of the General Political Bureau of Pyongyang’s Korean People’s Army. Hwang replaced Choe to head the bureau in May.

Choe was also replaced on the National Defense Commission only five months after his appointment. He was named to the vice chairman post in April after Kim’s powerful uncle, Jang Song-thaek, was executed in December 2013.

The National Defense Commission also had other reshuffles. Jang Jong-nam, former minister of the People’s Armed Forces, was removed from the commission while the incumbent minister, Hyon Yong-chol, and Ri Byong-chol, North Korea’s air force commander, joined the commission.

According to the Unification Ministry, the reshuffles of the commission are follow-up measures to earlier appointments. It also noted that the seats on the commission were increased from five to six.

The newly added seat was given to Ri, and the ministry said it is necessary to pay attention to his role from now on.

The ministry also said it is noticeable that Choe Pu-il, minister of people’s security, was missing from the podium of the Supreme People’s Assembly.

At the session, Prime Minister Pak Pong-ju briefed the legislature on the progress of a 12-year mandatory education program approved in September 2012, the North’s media reported.

The Supreme People’s Assembly is a rubber-stamp legislature of North Korea. Its head, Kim Yong-nam, is the nominal head of the Communist country.

It held its inaugural session in September 1948 after the North Korean government was founded to establish the Constitution. It holds a session once or twice a year. It has 687 delegates with tenures of five years.