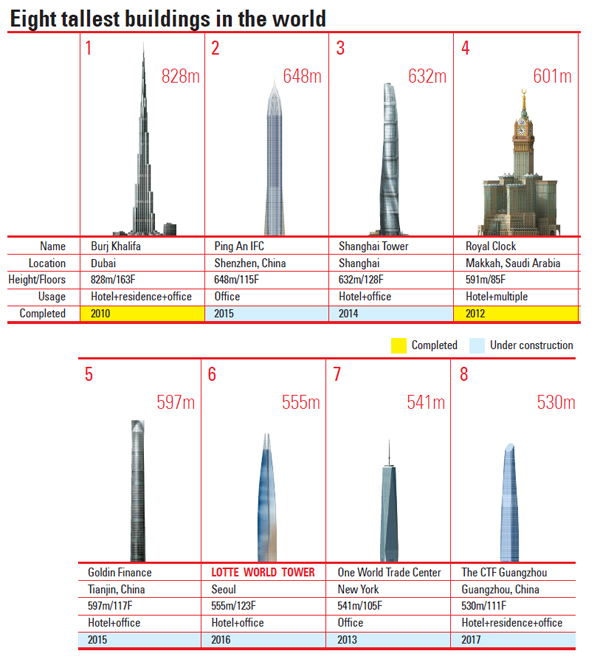 Lotte Group is confident it will receive the city government’s approval soon to open its 2nd Lotte World Complex and the Lotte World Tower, as the nation’s fifth-largest conglomerate is eager to debut what it says will be Korea’s landmark. 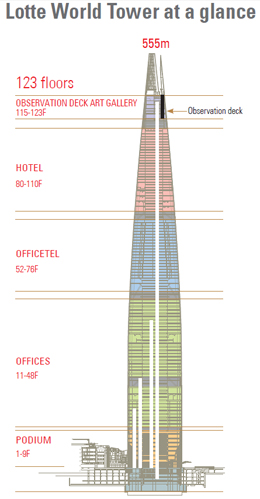 Three buildings for the 2nd Lotte World Complex in Jamsil-dong, southern Seoul, have been completed. The 123-floor, 555-meter (1,821-foot) Lotte World Tower is scheduled to be finished by 2016.

The opening of the mall and low floors of the tower was originally scheduled for June, but it has been delayed three times so far by the city government for safety and traffic inspections.

Approval had been expected late this month, but the Seoul Metropolitan Government recently postponed it again to October, saying Seoul Mayor Park Won-soon was on a business trip to the United States.

During his 10-day business trip, Park, who returns today, visited the construction site of the Wilshire Grand Hotel in Los Angeles and compared its safety standards to those of Lotte.

If Park gives the green light for the opening by next week as expected, Lotte plans to open the lower floors of the tower and mall in late October.

An inspection and “pre-opening” session earlier this month, when about 24,000 people visited the site over 10 days, found no major problems, Lotte said. An emergency evacuation drill was also successful.

In addition, the civic advising committee for the 2nd Lotte World Complex, consisting of Seoul residents and experts in traffic and building safety, told the city over the weekend the lower floors of the tower can be opened if there are no legal barriers.

“We understand the Seoul Metropolitan Government’s stance that it considers safety a priority,” said a Lotte spokesman. “But as experts’ inspection turned up no problems and there are no legal problems, we expect a quick decision from the city government.”

For Lotte Group, another delay would be costly. The group says it has been losing 90 billion won ($85 million) per month because stores inside the mall can’t be opened.

The group is especially disappointed that the complex is not open for the Incheon Asian Games and the Chinese National Day, which runs from tomorrow through Oct. 7.

Some business owners who prepared to open in late May complained about increasing inventory and labor costs.

Lotte said the opening of lower floors of unfinished tall buildings is not unusual. In Korea, Techno Mart in Sindorim, western Seoul, opened its building up to the 25th floor in June 2007, while floors 26 to 40 were opened six months later. Taiwan’s Taipei 101 and the Trump Tower in Chicago both began with lower-floor operations before the buildings were finished.

Lotte Group has been promoting its Lotte World Tower as a national landmark, as it will be the tallest building in Korea when completed.

“Currently, Korea doesn’t have a world-class landmark that can attract tourists,” the group said in a release. “As Asian countries are eager to bring tourists from all over the world, we really need to have a landmark in order to win in this competition.”

If the city gives its approval, the economic impact on the surrounding area would be substantial. Opening the lower floors, Lotte estimates, would create 6,000 jobs. Once the Lotte World Tower is completed, the group said, 20,000 people will be working at the mall and tower.